Cruising on the Mekong River

When my wife and I planned our visit to Southeast Asia we included a seven-night riverboat cruise from Vietnam to Cambodia. We have learned that such cruises reveal generally hard-to-reach people and places and provide a welcome respite from the demands of do-it-yourself land-based traveling.

We excitedly joined our tour group in a hotel lobby in Saigon (Ho Chi Minh City) and then boarded a bus for the two-hour ride to My Tho port, where our ship awaited us. Our spacious, air-conditioned stateroom and private balcony provided a comfortable refuge from which we could gaze at the Mekong River's chocolate-colored waters as they flowed past small villages and open land covered with coconut palms, bright-green rice fields and tall, swaying grasses.

Mornings we joined other early birds on the open-air top deck for sunrise stretching and yoga. Afterward we ate a bountiful breakfast that featured a cornucopia of fresh tropical fruits. Lunches and dinners were invariably sumptuous and included local cuisine options.

Each day we took morning and afternoon or early evening tours. For most excursions small boats ferried us to our destinations. We began with a visit to a Vietnamese floating market, where vendors offered boat-borne customers their home-grown fruits and vegetables. We noticed that nearly all of the sleek wooden ships we passed featured a pair of large eyes painted on the prow. Vietnamese boatmen believe that the eyes protect their riverboats from monsters or evil spirits while also bringing good luck and fortune.

Once ashore, we were transported through small villages or towns by ox-drawn carts, bicycle-powered trishaws or motorcycle tuk tuks. They ferried us to villages where we strolled down tidy dirt roads, observing how the friendly locals lived in their modest homes built high above the ground on wood poles. During the day families escaped the heat by sitting or lying on hammocks beneath the house, surrounded by children, cows or chickens. In addition, we visited workshops that made rice paper, coconut candy and rattan. One of the most interesting demonstrated the process of weaving gorgeous silk fabrics, starting with caterpillars and silk cocoons.

The markets we visited were filled with a mind-bending array of food items, including trays of skinned rats and skewered frogs, buckets with wriggling eels or octopuses, and tables laden with hunks of meat of indeterminate origin. Other stalls offered sweet potatoes, onions, cabbages and other vegetables, along with fresh flowers and assorted offerings for altars in homes or temples.

Architectural history and literary romance blended as we toured two historic homes: a 150-year-old Hue-style home with ornate porcelains and carved woodwork and the family home of a wealthy Chinese merchant portrayed in "The Lover," a novel by Marguerite Duras. During our visit to the largest Buddhist monastery in Cambodia, formerly the site of Cambodia's royal capital, we each received a special blessing from the head monk.

One of my favorite tours involved a visit to the home of a middle-aged Vietnamese man who had served in the South Vietnamese Army's Special Forces during the war. Speaking through a translator, he told us about the severe leg wound that ended his service and of his many months in a North Vietnamese re-education camp. When he learned I was an American he shook my hand, hugged me and then saluted me. His eyes glowed as he showed me a prized photo of himself and a returning U.S. Vietnam War veteran, and he saluted again as I departed. His endearing smile touched my heart.

The second visit that made a lasting impression was in a Cambodian elementary school, where we sat with the children after they greeted us with a delightful song. Colorful drawings lined the walls, but one in particular stood out. I asked who had done that one and the teacher shyly responded that it was hers. When I praised her artistic skill, she removed it from the wall and handed it to me.

When we were onboard the ship we learned about local music and dance as Vietnamese musicians played traditional instruments unique to the area, while later a group of five young barefoot Cambodian girls wearing gold crowns, gold bangles and pastel-colored silk brocade sarongs demonstrated classical dancing reminiscent of Thai dancing.

We ended our voyage in Cambodia amid the best and worst of human nature. During our two days in the country's capital, Phnom Penh, we enjoyed tours of the Royal Palace, National Museum and the main boulevard's statues and towering stupa. But the most heartbreaking and unforgettable tour brought us to two nefarious places where the country's monstrous Khmer Rouge soldiers tortured and slaughtered their own countrymen, nearly 25% of the population in less than four years.

When our cruise ended in the Cambodian port city of Kampong Cham, a four-hour bus ride took us to Siem Reap, best known for its Angkor Wat temple complex. As we explored some of the world's most magnificent ancient Buddhist and Hindu temples and palaces, we were elevated from humankind's worst horrors to its most sublime accomplishments.

We selected AmaWaterways for our seven-night Mekong River cruise. All meals and some beverages were included, along with daily excursions led by local guides and 52 crew members attending to only 124 passengers. To say that it was a memorable and worthwhile experience is an understatement: www.amawaterways.com or 800-626-0126. 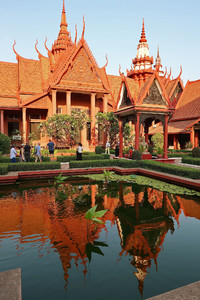 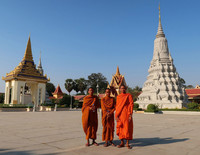