One of my favorite days of the year is right around the corner. Christmas? New Year's Eve? Valentine's Day?

Nope. I'm talking about the first day of winter.

Now, lest you think this ol' desert rat enjoys the cold, crisp air of the season — or perhaps the snow that piles up in some places — let me assure you that few things could be further from the truth. Maybe it's the long, dark winter nights that I like? Not a bad guess, considering my nocturnal stargazing tendencies.

No, the real reason is that the first day of winter is marked by the winter solstice, and that's what I eagerly anticipate. This year's solstice occurs at 11:10 p.m. EST (8:10 p.m. PST) on Saturday, Dec. 21.

The winter solstice marks the moment that the sun reaches its southernmost position over our planet and begins its journey northward. To an observer in the Earth's Northern Hemisphere, the day marks the sun's lowest position in the midday sky and the beginning of its climb once again.

And because at this time of year, the sun appears in our Northern Hemisphere sky for only about nine hours a day, our temperatures are noticeably lower.

So why, then, isn't the year's coldest day on the first day of winter? That's because our atmosphere takes time to respond to temperature variations. If you remove a pot of hot water from the stove, then you know, intuitively, that it doesn't cool down instantly, and you make allowances for that when cooking.

The same is true with our atmosphere; as a result, the coldest time of the year in the Northern Hemisphere typically occurs not around Dec. 21 but in late January or February.

It all happens because our planet's equator is tipped by about 23.4 degrees to the plane of its orbit around the sun. This means that during this time of year, the Earth's Northern Hemisphere is tilted slightly away from the sun, causing the sun's rays to shine down on us at a relatively shallow angle. Six months — and half an orbit — later, our planet's tilt aims the Northern Hemisphere slightly toward the sun, and the solar rays shine more directly down upon us.

Now, I'm certainly not the first ever to anticipate this marvelous moment; it's been celebrated by cultures throughout the ages as the rebirth of sunlight, warmth and life on our part of planet Earth. And it's not a coincidence that some of our world's major religious holidays are celebrated around this time of year.

Even the term "solstice" originates in antiquity, coming from two Latin words: "sol" (meaning "sun") and "sistere" (meaning "to stand still"). It is at the winter solstice that the sun's southerly midday drop seems to end, the sun "stands still" and the star that gives life to planet Earth begins its ascendancy once again.

From this moment until mid-June, the sun will appear higher in our midday sky, our days will become longer, temperatures will gradually begin to rise and the greens of life will return to the Northern Hemisphere of Earth.

And — at least from my perspective — not a moment too soon! 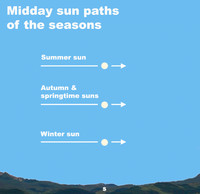 The winter solstice marks the moment that the sun reaches its southernmost position over our planet and begins its journey northward.