Modern astronomers recognize 88 constellations in the heavens. These cover the entire sky — from pole to pole — and represent animals, objects and even people of mythological origin.

Occasionally, however, we come across one that's actually associated with a real person. Such is the case this week if we head outdoors shortly after dark and look midway up in the eastern sky.

There, high in the northeast, you should easily spot the Big Dipper, itself not officially a constellation but rather an asterism, or a group of stars that seems to outline something familiar. Follow the arc of the Dipper's handle away from its bowl and you will soon encounter the bright yellowish-orange star Arcturus and, eventually, the bluish-white star Spica lower in the southwest.

It is within the arc formed by these three celestial points that we find the small faint constellation known as Coma Berenices, which represents the beautiful amber hair of the ancient Egyptian Queen Berenice II, the wife of Ptolemy III (also known as Ptolemy Euergetes).

The brightest star in this constellation is known as Beta Comae; it is about one and a half times larger and more than three times more luminous than our own sun but appears quite faint in our sky.

The story of Coma Berenices tells that Ptolemy, in order to avenge the murder of his sister, waged a long war against the Assyrians. To honor his safe return, Ptolemy's wife Berenice had her beautiful tresses ceremoniously clipped and laid out on the temple alter to present to Aphrodite, the Greek goddess of love and beauty.

Later that evening, as the celebration continued, someone discovered that the hair was missing. To prevent terrible panic, the astronomer Conon of Samos proclaimed that Aphrodite had graciously accepted the gift and that she had honored the beautiful hair with a place in the heavens.

And, sure enough, we can now see it there in the sky — right where Aphrodite placed it so many centuries ago.

While the story of Berenice's hair is old, the constellation itself is relatively new. In fact, it wasn't even created until the 16th century Danish astronomer Tycho Brahe sketched it on his sky maps.

Today, astronomers recognize that Coma Berenices contains a star cluster visible to the unaided eye as a hazy cloud of stars. If you have a dark sky free of light pollution, aim binoculars in its direction and you'll easily see more than three dozen stars making up the beautiful open cluster known as the Coma Star Cluster. This swarm is one of the nearest to Earth, only 270 light-years away.

Though the constellation is small and faint, it is quite a fertile region for stargazers with optical help. At least eight galaxies beyond our own Milky Way appear in this celestial area and all are well within range of small backyard telescopes.

During the next month or so, Coma Berenices will appear higher in the early evening sky, so I hope you'll get out and search for this delicate and beautiful stellar tribute to Egypt's Queen Berenice! 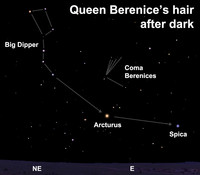 Within the Coma Berenices constellation, Beta Comae is the brightest star.