Among the stars of the night sky lie constellations that derive from real and imaginary people, animals and objects, but rarely can anyone trace the images they represent. Take, for example, the flying steed known as Pegasus. I defy anyone to look skyward and outline its stars in such a way that they can see a flying horse. And if you can, well, I'm afraid you'll need more help than I can give you.

Years ago, during my internship at the Strasenburgh Planetarium in Rochester, New York, our director was fond of saying that the constellations look no more like their namesakes than the George Washington Bridge looks like the father of our country. Of course, he was correct.

Another fine example of a star grouping that's tough to outline is the constellation Monoceros, the unicorn. Monoceros is composed of faint and obscure stars, and we often overlook it because it happens to lie within some of the most brilliant celestial real estate. With the moon away from the evening sky early this coming week, you can search for it just to the east of dazzling Orion and between the bright stars Sirius and Procyon.

It's tough to know where these constellations originate. Often, their roots are lost in antiquity, but we think that Monoceros may have a bit more modern origin. Some believe that it might have been the 16th century Dutch theologian, cartographer and astronomer Petrus Plancius who invented this constellation, though some think it was actually named "Unicornu" by German astronomer Jacob Bartsch, who published Plancius' star maps in 1624.

If you are able to find the constellation in a dark, moonless sky — which is pretty much the only way it's possible — you should also be able to see the faint wintertime Milky Way flowing gently southward through it.

Once you find Monoceros, you'll discover it takes quite an imagination to fashion a unicorn from its stars. But it's not so much the constellation that's interesting as what's lurking within. Though they're rather faint, a number of celestial wonders are visible if you have a small telescope to aim in this direction.

Monoceros is home to a beautiful triple star system — three stars which orbit a common center of gravity — known as Beta Monocerotis. It was the famous astronomer William Herschel who discovered it in 1781, the same year he found the planet Uranus. Herschel found the three stars of Beta Mon to form a triangle that, from our distance of nearly 700 light years, appears not to change over time, and he described it as one of the best triple star systems he'd ever seen.

Also lying within the boundaries of Monoceros is the famous interstellar cloud named the Rosette Nebula, which engulfs a star cluster known as NGC 2244. With a backyard telescope, one can sometimes make out some diffuse nebulosity here, but it takes a pretty hefty scope to distinguish its ringed shape.

Even if you don't own a large enough telescope to show these celestial wonders, I hope you'll at least get out to search for the unicorn. I suspect it'll be the only one you ever see! 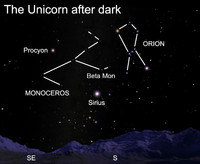 Monoceros is home to a beautiful triple star system known as Beta Monocerotis.