For this week's sky show, I'm afraid you'll have to set your alarm and get up before dawn. If you do, you'll see a wonderful display of solar system objects in the southeastern sky as the waning crescent moon swings past the planets Mars, Jupiter and Saturn.

On the morning of Feb. 18, watch for the moon to play a game of hide-and-seek with the "red planet." What you see depends on where you live; some skywatchers will see Mars on the left side of the moon, while others will see it on the right. And some may not see it at all.

Why? Because on that morning the moon (only 240,000 miles away) will drift in front of Mars (about 168 million miles away) and create what astronomers call an occultation. When and where you observe will determine whether Mars will be visible or hidden behind the solid disk of the moon. Some may even need to wait for the moon to rise higher after sunrise to see Mars disappear or reappear behind its disk. For that, however, a small telescope will be necessary.

In the eastern U.S., Mars will disappear behind the moon at roughly 7:30 a.m. and reappear around 9 a.m. On the West Coast, however, Mars will vanish at roughly 3:30 a.m. and appear around 4:30 a.m. Every location will be different, but it's worth checking it out with binoculars or a small telescope. Call your local science museum, planetarium or amateur astronomy club for exact times for your area, and always begin observing at least 15-20 minutes early.

If you miss the occultation on the 18th, you've still got a few days to watch the moon pass two other planets. As the moon swings by each planet, be sure to check out these pairings with binoculars; few celestial sights appear more three-dimensional. Of course, this is purely an illusion caused by our inability to see true depth in the cosmos, but it results in a truly pretty picture.

At dawn on Feb. 19, the moon's crescent will appear near the bright planet Jupiter. Jupiter is the largest planet of our solar system, with a diameter 11 times that of our planet, and on that morning, it will lie about 547.6 million miles away, while the moon will be only about 242,800 miles from Earth. Aim a small telescope toward Jupiter and you'll see its pastel cloud bands and, on that morning, its four largest moons spread in a straight line across the field of view.

By the next morning, the moon's orbital motion around the Earth will have carried it eastward, and on Feb. 20, it will appear near the ringed planet Saturn. Saturn lies just over a billion miles from us that day, but the moon will be a mere 245,500 miles away. Of course, you won't see Saturn's beautiful rings with the unaided eye, but aim a telescope in its direction and you will, along with its largest and brightest moon, Titan.

If you can drag yourself from a nice, warm bed on a cold February morning, you'll definitely be rewarded by some beautiful sights! 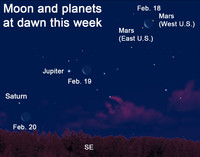 This week, the waning crescent moon swings past the planets Mars, Jupiter and Saturn.