Brilliant Stars of the Winter Hexagon

Spring is about to spring here in the Earth's Northern Hemisphere. First, we start (at least in most of the U.S.) with the change from standard time to daylight saving time on Sunday, March 8, followed only 11 days later by the vernal equinox: the official onset of spring.

The sky, of course, reflects these seasonal changes as the stars of springtime appear higher in our eastern sky each night. It's nice to think of the approach of springtime, but we're not out of winter yet. High in our early evening sky remain the brightest stars of the entire year — those of winter.

There we can find the familiar star groupings of Orion, Taurus, Canis Major, Canis Minor, Auriga and Gemini. I've certainly written about them here over the years, but sometimes their outlines are not so obvious to beginning stargazers, especially with the bright moonlight we'll have during this coming week.

So, let me introduce you to something that might just be easier to spot. It's one of the largest and brightest of all asterisms: the Winter Hexagon (aka, Winter Oval).

To find it, head outdoors during the early evening hours this week, and look toward the southern sky. There you should have no difficulty finding the brilliant bluish-white star Sirius — the brightest in all the heavens. This star is often known as the "Dog Star" and is the brightest and one of the nearest of all stars in our sky. It will form our starting point for outlining the hexagon.

From Sirius, follow a line upward and to the left until you encounter another fairly bright star: Procyon, the brightest star of Canis Minor, the little dog. Then continue upward toward the two nearly-equally bright stars Pollux and Castor. These form the heads of the twins represented in the sky by Gemini. Farther to the right of these two lies another bright one: Capella in Auriga, the charioteer.

From Capella, slide downward and to the right until you encounter the orange star Aldebaran in Taurus. This star represents the "fiery red eye" of the bull staring angrily toward Orion, the hunter. Dropping down even farther and to the left, you'll encounter Rigel in Orion's knee. Then, head back to the left toward Sirius, where your journey began.

As the moon orbits the Earth this week, it will appear to cross the stars of this region. Watch for it to enter the hexagon on the night of March 2, when it will appear just east of Aldebaran, and on March 5, it will exit it just below the star Pollux.

All totaled, this huge asterism encompasses eight of the 18 brightest stars visible to stargazers in the Earth's Northern Hemisphere, and it is one truly great Winter Hexagon!

Once you've found this large asterism, and you see how easy it is to create your own pictures, perhaps you can begin searching the sky for other shapes: geometrical figures, letters of the alphabet, punctuation marks (periods don't count!) and more. By creating your own asterisms, you'll learn the sky more quickly than if you depend on fanciful ancient figures that don't even exist. 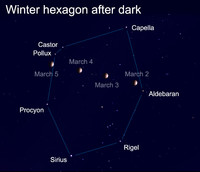 The Winter Hexagon is one of the largest and brightest of all asterisms.