Every week, I try to present a feature of the night sky that's fairly easy for stargazers to spot; sure it might take a little effort, but there's nothing wrong with that. So this week, I thought I'd offer you a bit more of a challenge.

Just after dark this week, there's a group of stars in the northern sky that I'll bet you've never seen. In fact, it's a star grouping that many experienced stargazers have neither seen, nor even heard of. Its name is Camelopardalis, and it has to rank right up there with the most obscure constellations in all the heavens.

Camelopardalis is named for the giraffe, or the "leopard camel" as the ancient Greeks knew it. It was probably the 16th century Dutch theologian, cartographer and astronomer Petrus Plancius who conjured this one up, though some believe it might have been named by German astronomer Jacob Bartsch, who published Plancius' star maps in a 1624 constellation book.

When the Chinese established their constellations about a millennium earlier, the north celestial pole — the point in the sky about which the entire heavens appear to rotate during the night — lay among the stars of this region. Despite the fact that there was only one faint star at that point, the Chinese — whose culture says that the north star is the residence of the heavenly emperor — grandly named this star Tianshu, the Celestial Pivot.

Though Camelopardalis is formed by extremely faint stars, with some imagination — OK, a lot of imagination — you might actually be able to trace a giraffe out of these. To do so, however, you'll definitely need to get away from the devastating effects of urban light pollution and park yourself under a fairly dark rural sky with no moonlight.

Shortly after dark, face north. Next, find Capella, the brilliant sparkling star high in the northeast.

From Capella, cast your gaze toward the left, and you should be able to find the zigzag outline of Cassiopeia. Below Cassiopeia is the North Star, also known as Polaris. Of course, Polaris is much fainter than Capella, but along with this star and Cassiopeia, it forms a triangle in the middle of which lie the stars of the Giraffe.

Now appearing upside down, Camelopardalis can be traced with two stars that mark its legs, four that form its body and two more that mark its long neck and head.

Camelopardalis is one of those star groupings that never appears to rise or set from midnorthern latitudes. As a "circumpolar" constellation, it's visible every night to stargazers throughout North America, though it does revolve around Polaris.

The brightest star there — Beta Camelopardalis, as it's known by astronomers — forms the top of the giraffe's front leg. It's a yellow supergiant star about 1,600 times more luminous than our own sun, but, because of its tremendous distance of 870 light years, it appears rather faint.

Once you find these stars, tracking down the others of the celestial giraffe shouldn't be too tough. I hope you'll let me know if you see it — and perhaps offer me some better tips on how to find or trace its stars. 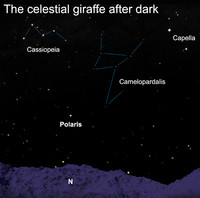 Camelopardalis is named for the giraffe, or the "leopard camel" as the ancient Greeks knew it.