'Zack Snyder's Justice League': Too Much of an OK Thing

PRO: Some of the dialogue in this otherwise-rather broody movie is actually amusing. For example, when Bruce Wayne/Batman (Ben Affleck) encounters difficulty putting together a team of superheroes, his butler, Alfred Pennyworth (Jeremy Irons), says, "Maybe a man who broods in a cave for a living isn't cut out to be a recruiter."

CON: On the other hand, some of the dialogue is dopier than the writers realized. After Wonder Woman (Gal Gadot) rescues a group of little girls from a gang of gunmen by kicking a whole bunch of gunmen butt, one of the little girls looks up at her adoringly and says, "Can I be like you someday?" To which WW inevitably replies, "You can be anything you want to be."

PRO: The movie is an example — an excruciatingly long example — of what can be accomplished when you follow your dream and never let it go. Zack Snyder has been on the Warner Bros. superhero beat since 2013, the year his first Superman film, "Man of Steel," was released. Critics didn't much like that one, but money was made. However, its sequel, the 2016 "Batman v Superman: Dawn of Justice," tanked resoundingly, decried by critics and civilians alike. So when it came time to make a third Superman film, "Justice League," Warner execs were alert for portents of disaster. They wanted something lighter this time — maybe something like the "Avengers" movies that superhero-whisperer Joss Whedon was turning out for Disney's Marvel Studios. When Snyder — worn down by studio negativity and then by the death of his daughter, Autumn — bailed out during post-production, Whedon was brought in to tidy up, rewriting, reshooting and whacking away at the abundance of footage Snyder had already completed. The Warner suits wanted a commercially manageable two-hour picture, and Whedon gave them one. Everybody hated it.

CON: The movie — which, again, is maddeningly long — is an example of what can happen when you follow your dream into a ditch. With the box-office collapse of the original "Justice League," Snyder's fans began calling for the release of his pre-Whedon cut of the picture. Warner Bros. saw a future for this idea at its streaming service, HBO Max, and Snyder was given something like $70 million to complete the film. He was also encouraged to reinstate the footage that Whedon had excised — of which there was a lot.

PRO: The new "Justice League" has more heart than the last one. Ray Fisher's man-machine Cyborg, especially, blossoms as a character. We get a lot of moving new detail about his troubled relationship with his scientist father (Joe Morton), and we try to imagine how exasperated Fisher must have been when all the good work he does here was deleted by Whedon. Also opened up quite a bit is Ezra Miller's character, Barry Allen/The Flash, who meets the love of his life (Kiersey Clemons as Iris West) in the middle of a big CGI scene. (It'd be OK by me if Miller's goofball chirpiness could have been toned down a little for this version of the film, however.)

CON: The new "Justice League" has more characters, of course, some of them flitting through in virtual cameos: Willem Dafoe and Amber Heard, both from the world of Aquaman; Billy Crudup as Barry Allen's imprisoned dad; Joe Manganiello as the menacing Deathstroke; and — sorry about this — Jared Leto's giggly Joker, who turns up near the end, just as we're about to pass out from exhaustion, in a deeply unnecessary "epilogue." Gal Gadot once again lights up the whole picture every time she smiles, and Ben Affleck once again seems bored (until the final scene, in which he suddenly comes alive, bantering playfully with a green guy in a big, flowy cape). Amy Adams' Lois Lane is once again bummed about the "death" of her boyfriend, Superman (Henry Cavill, very much alive, of course), and Jesse Eisenberg remains miscast as Lex Luthor.

CON: The villains still aren't all that scary. The armor-plated Steppenwolf (Ciaran Hinds), who looks as if something very heavy fell on his head, is basically a screwup, a constant disappointment to his only marginally more terrifying boss, Darkseid (Ray Porter). And Darkseid's attendant "Parademons," which buzz around like black mutant mosquitos, are mainly an irritation. Scarier by far is the moment when you sneak a look at your phone and see that there's still more than an hour of this movie to go.

CON: The CGI. Really, it's an unending assault. Not badly done, maybe, but the whole universe seems to always be on fire, and wafting embers relentlessly clog the screen. It's sometimes impossible to determine where we are, or, after a while, why we should care. All that non-superhero obsessives are likely to be wondering as the minutes inch buy is why this movie, which (spoiler) concerns the whereabouts of three frickin' boxes , had to be this brain-foggingly long. 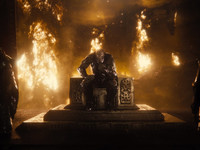