I had done it before so I thought it wouldn't be so difficult. In delivering funeral eulogies, unfortunately, I've had some practice.

But it was always for a friend who passed, never for one of my relatives.

In my own family funerals, I always deferred the eulogy speech to my brother, Beny, who had a special knack for speaking, and even singing, in public. I knew he could do it much better.

Yet, there I was, standing in Beny's shoes, speaking in church, delivering a family eulogy at a funeral. And I had to find the courage to do it. Of all of us in the Perez family who came from Cuba in the early 1960s, I'm the only one left alive. It was my turn to speak for the "familia."

It was the toughest speech I've ever delivered, as it was Beny's funeral.

When my one-and-only brother Benito "Beny" Perez died in a Miami hospital on Oct. 28, I had to draw strength from recalling how Beny would tackle these kinds of difficult moments, how he would turn a funeral into a celebration.

In his eulogies, Beny would celebrate the lives of our elders with a series of anecdotes that would make mourners cry and smile at the same time. He would review their accomplishments with such love and admiration that it was difficult not to be awed by his passion.

The last one was for our grandmother Ofelia, who left a wealth of anecdotes when she passed in 2005, at the age of 106.

As I remembered the eloquence with which Beny celebrated our grandmother's life, and as I tried to emulate his passion in my eulogy for him, I realized that even after his death, Beny is still my role model — just as he was when he taught me how to recite Cuban poetry during our childhood.

In the 1950s, back in our hometown, La Salud — part of Cuba's La Habana province — Beny was the unofficial town poet. On every holiday and every patriotic event, even as a young boy, Beny would recite patriotic Cuban poetry with such passion that the town's folks would always ask for more. As Beny grew older and La Salud needed a new boy poet, I followed in his footsteps.

And there I was, doing it again during my eulogy: reciting a portion of one of the poems he taught me when we were kids back in Cuba. "Al volver de distante ribera, con el alma enlutada y sombra . . . "

But poetry was just one of the many things I learned from my brother, who was seven years older than me and a century wiser. He taught me many of life's most valuable lessons.

It was from Beny I learned the true meaning of friendship. I've never met anyone more loyal to his friends. Perhaps that's why so many of them were openly weeping at his funeral services, lamenting to me about losing their best friend. And that was Beny! He had the heart and compassion to be everyone's "best friend."

Except for Beny, I've never met anyone who stopped to give alms to every homeless person he encountered. I've never seen anyone more willing to pick up your spirits when you were down — even if he had to resort to singing you a song. But that was easy for him. More than he loved reciting poetry as a child, as an adult, he loved to sing. You would go to a restaurant with him, and if it had live music, he would excuse himself to go to the bathroom, but then suddenly you would hear him singing with the band. It was awesome!

More than anything else, it was his passion for life that made me proud to be his brother.

Although he turned 70 in the hospital only days before he died, Beny always behaved like he was 35. And perhaps that's why his sudden demise has been so shocking to his friends and family. We feel that he left us too soon.

After all, he was a fairly healthy man who went in for a relatively simple procedure to treat his arrhythmia and came out with an open-heart surgery and a series of mind-boggling complications, which required more operations, landing him in the intensive care unit for almost two months and eventually leading to his death.

But while the circumstances that led to his demise, the absurd medical malpractice laws in Florida and the suffering endured by our family could be fodder for another column, this is not the time to dwell on the way he died, but on the way he lived! He had a wonderful life.

For most of his life in this country, Beny was a successful real estate salesman, property owner and investor. But he wasn't about keeping it all in the piggy bank. He was about living life to the fullest. He was a strong believer in an afterlife, but he always said, "You can't take the money with you."

Yet, he appreciated the value of money like no one I've ever seen. It had a lot to do with the sacrifices he had to make for our family when he was only a teenager. In fact, it was because of Beny that our entire family was able to emigrate from Cuba to the United States.

Because we had no relatives in this country who could claim and secure refugee visas, when Beny was only 17, my parents sent him to Jamaica, where he spent several months seeking and eventually receiving a visa to enter America as a refugee. He spent more than a year, from 1961 to 1962, washing dishes and waiting on tables in Miami Beach hotel dining halls so he would be able to claim visas for the rest of our family. When my parents and I arrived in Miami in April 1962, Beny had secured an apartment and put food on the table for all of us. And he continued to support us for several years.

He had been prematurely forced into adult responsibilities, forced by circumstances to give up his dream of going to college and seeking a professional career. But he overcame all those obstacles. I always told him I admired his sacrifices. He was my hero, my confidant and my safety net. For as long as I can remember, he was always there when I needed him. He left a void that cannot be filled. I loved him dearly.

With Beny's death, I became the sole survivor of three generations of a Cuban family who had been buried in exile while waiting for its homeland to become free.

Beny and I always thought that it was bad enough that our grandparents died in exile, without ever seeing Cuba regain its freedom, and that the Fidel/Raul Castro dictatorship had outlived even our parents. But we never imagined that three generations of my family would die without seeing a free Cuba. For many years, Beny and I had been keeping the family flame alive, vowing to return home someday on behalf of our ancestors, when Cuba is free. 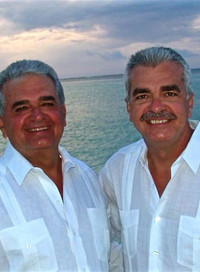