Q: I know spring is here, but my clematis vines are overgrown and I need to trim them. I think they are supposed to be pruned during the winter when they are dormant. Can I still prune them now while they're starting to grow? There is not much growth yet.

A: It is probably a good thing that you didn't prune them during the winter when they were dormant. Clematis and other flowering vines, such as honeysuckle and wisteria, are often best pruned after they bloom. Vines and shrubs that bloom in the spring are blooming on stems that are at least one-year-old. These stems are called old wood. If the vines bloom later in the summer, they would be blooming on branches that are brand-new this year, called new wood.

Clematis plants are pruned based on when they bloom and whether they bloom on new or old wood. Some bloom in late spring or early summer on previous year's old wood. After they finish blooming, they can be cut back just a little, or a lot more. This will encourage a flush of new growth that will become next year's blooming old wood.

If these branches are cut down to the ground and then allowed to regrow, you will only get a half-season's growth, so the plant will be shorter. If you desire a taller plant, prune less and keep a framework of longer branches. Then, each year after the flowers bloom, cut the branches back.

Clematis that bloom in the summer or fall on new wood can be pruned as far back as 6 inches above the ground. This can be done in the fall or winter, all the way until spring, as long as it's done before the buds begin swelling in the spring. All of this growth will be new wood that will bloom later in the summer.

Sweet autumn clematis blooms in early fall on new wood. I cut mine to the ground while I am raking leaves later in the fall. Each spring, the vine vigorously grows new shoots that can also be used as a ground cover.

Some clematis bloom on both old and new wood. They will bloom in June on old wood, and later in the season on new wood. After they bloom in the spring, they can be cut down to as short as 3 feet tall. Flowers will continue to grow on the new wood through the summer into the fall. The more wood that is cut off during spring pruning, the longer it will take for new flowers to be produced. Some of the plants in this group will have double flowers on the early-blooming old wood, and then normal single flowers on the summer-blooming new wood.

The first part of any pruning is removing the three D's: damaged, diseased and dead wood. Remove any branches that cross or interfere with others. Finally, prune the branches according to the direction you want them to grow. Always cut the branches where they meet a side branch or at a bud, not in the middle of the stem. 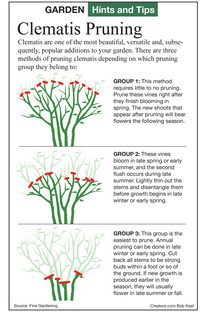