EDITORS NOTE: The following column is the first syndicated column written by Hillary Clinton for Creators Syndicate. It was originally released on July 23, 1995. All subsequent columns are arranged beginning with those filed most recently (in 2000 just before Mrs. Clinton joined the Senate) and ending with her first columns written in 1995. — CREATORS SYNDICATE

On a recent trip to Arkansas, I had a sudden impulse to drive. We were staying at my mother's house in Little Rock and I needed to run some errands. So, on a quiet Friday afternoon, I jumped behind the wheel of a car and, much to the discomfort of my Secret Service detail, drove myself around town. For several hours, I enjoyed a marvelous sensation of personal freedom.

For me this brief taste of everyday life has come to represent the odd duality of my role as First Lady. On the one hand, I feel privileged to meet people and go places totally out of reach for most men and women. On the other hand, experiences that millions of Americans take for granted have become extraordinary for me.

A few months back, for instance, I was browsing through a museum in Washington. There I was, one of the most recognizable women in America, thinking I could somehow blend anonymously into the artwork.

Suddenly, a woman came up to me. "You sure look like Hillary Clinton," she said.

The truth is that sometimes it is hard even for me to recognize the Hillary Clinton that other people see. Like millions of women across our country, I find that my life consists of different, and sometimes paradoxical, parts. Often those parts are reduced to a snapshot of one moment in my day, when in fact I wake up every morning trying to figure out how to mesh my responsibilities to my family, my public duties and the friend who might be stopping by for dinner.

No doubt the same is true for many people, whether they are beauticians, bankers, teachers or truck drivers. It is just that the complexity of my role is played out in public.

Whatever minor inconveniences my situation presents, I wouldn't trade it for the world. A few years ago, I could never have imagined the range of activities that are part of my life today, such as defending public television, planning state dinners and visiting the CIA with the President. I have also met a lot of interesting people. Some are famous, like Lady Bird Johnson, Nelson Mandela and Mother Teresa. But most are men and women we never hear about who wake up in the morning, do the best they can, and contribute more to their families and communities than most of the celebrities and public figures whose names regularly appear on the evening news.

It is the unforgettable faces, heroic life stories, historic events, pressing issues and comedic moments that have most defined my time in the White House. Now I will have the opportunity to share these experiences and observations directly with newspaper readers everywhere.

I recently accepted an offer first made two years ago to write a column about my life as First Lady. My hope is that this weekly column will talk about the most immediate issues on people's minds — the funny, the sad, the inspiring and the momentous — and give people a view of events they might not otherwise have a chance to see.

Every year, I receive hundreds of thousands of letters asking about everything from Socks' feeding schedule to Medicare benefits for mammograms, from the financial pressures affecting working families to my recent trip to South Asia. I have been told that for every person who writes me, there are thousands and maybe millions of others with the same question or concern.

Some people may wonder whether I am looking to Eleanor Roosevelt for my inspiration. In thinking about this column, I re-read the column that Mrs. Roosevelt wrote nearly every day for the better part of three decades. She called her column "My Day" and covered subjects as varied as her annual picnic for disadvantaged boys, the meaning of religion in our lives and the fuss over a new bob in her hair. Sounds familiar!

My hope is that this column, like hers, will prompt all of us to think more about the human dimension of our lives. In some small way, I hope it will help bridge the gaps in our society so that we can reach beyond stereotypes and caricatures — and respect one another for the unique contributions each of us makes to our country.

My wish too is that it will provide information about problems facing us that people can use to help decide what they think should be done. Mostly, though, this column will give me the chance to talk things over in the hope that some of you will join the conversation.

So, let's talk again next week. 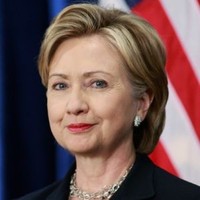