Q: This is a picture of one of the plates in a service-for-eight dinnerware set we purchased when we lived in California. Each piece is decorated with purple violets in the center and smaller violets on the scalloped borders against a white background, trimmed with silver. The dishes are marked on the back with a crown above a shield and the words "Bavaria - Schumann Arzberg - Germany." Below the mark is a crown and the letters "E & R - Violette."

We tried researching the maker online but only found a violet pattern trimmed in gold. We hope you can help us determine the approximate time frame in which the set was made and any other information you may be able to find.

A: Carl Schumann Porcelain Factory made your porcelain dinnerware around 1960. The company was founded in Bavaria in 1881. The letters "E & R" represent distributors and importers Ebeling & Reuss. They were located in Devon and Philadelphia, Pennsylvania, in the United States from 1866 to 2002 and imported fine china and giftware from multiple factories in Europe. "Violette" is the name of the pattern.

There are several sets of your dinnerware offered online, ranging from $300 to $400. Just because they are priced at that value doesn't mean they are actually selling. It can be difficult to find interested buyers. People prefer dishes that can be microwaved or put in the dishwasher. Dishes trimmed in silver are not compatible with microwaves.

Replacement or insurance value would be in the range of $300 to $500 for the service-for-eight dinnerware set.

Q: This mark is on an oak bookcase I bought at an estate sale around 1964. It is 60 inches tall, 15 inches deep and 36 inches wide. There is a single door with a copper latch; it has four stationary shelves, and glass panes with mullions and glass sides. The mark appears to be burned into the wood. It has the original finish and is in excellent condition.

Anything you can tell me about my bookcase will be appreciated.

A: You have an arts and crafts bookcase made by Gustav Stickley Craftsman Furniture. His guild-like shop existed from 1890 to 1916. The Arts and Crafts movement began in Europe and quickly spread to the United States. Stickley grew up with a strong work ethic that influenced his principles and was based in honesty and simplicity. He rebelled against the ornate, overly decorated designs of the Victorian era. His goal was to eliminate all decoration and return to sturdy, simple construction. The mark, with a joiner's compass and the Flemish words "Als Ik Kan," was used from 1902 to 1916. The words mean "as well as I can."

"Violette" pattern was made by Carl Schumann. 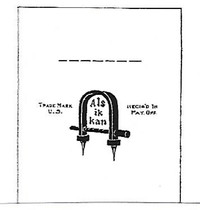