A Plethora of Porcelain Was Produced in Occupied Japan

Q: This is a photo of a pair of porcelain figurines that belonged to my grandmother. Each man is playing a musical instrument, and they all are wearing 18th-century clothes. The overall height of each is approximately 5 inches tall, including the base. They are hand-painted and in excellent condition. Marked on the bottom of each are the words "Made in Occupied Japan."

Anything you can tell me about the vintage and value of my figurines will be greatly appreciated.

A: You have a pair of porcelain colonial couples that were made in occupied Japan after World War II. The Allied occupation of Japan was under the direction of American Gen. Douglas MacArthur from 1945 to 1952. A plethora of porcelain figurines were made by Japanese factories, catering to the tastes of Europe and the United States. Some porcelain figurines were influenced by classical German Meissen pieces. Many figurines were sold in five-and-dime stores. There are collectors whose main interest is in pieces marked "Made in Occupied Japan."

Q: Enclosed with my letter is the mark on the bottom of a porcelain pitcher I have. It originally belonged to my great-aunt. When she gave it to me, she told me it was worth quite a lot of money. The pitcher is about 15 inches tall and cylinder-shaped. It is decorated with grapes, leaves and branches. The handle is heavily decorated with gold, and the top is scalloped.

I would never part with it but would like to learn more about its history, maker, age and whether it has any value.

A: Based on your description, you have a tankard pitcher. It was made by Willets Manufacturing Co. They were located in Trenton, New Jersey, from 1879 to 1909. They produced Belleek porcelain that was as fine in quality as Irish Belleek. Willets maintained an outstanding decorating staff, and some pieces were signed. They also made whiteware, known as blanks, that was sold to art studios and amateur china painters. Their Belleek production took place from 1884 to 1909. 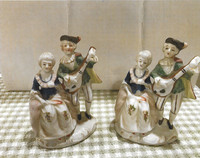 Porcelain for the West was exported from occupied Japan. 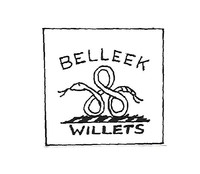