Q: We are enclosing a photo of a dessert set that has been in the family for three generations. My husband's mother gave it to us, and she got it from her mother-in-law. The set is very thin china and consists of a cake plate, six cups, saucers and dessert plates. Each piece is decorated with orange and blue flowers, trimmed in gold and marked "Germany." It is in perfect condition and appears to be hand painted. We have been married for 67 years and are now downsizing. We would appreciate knowing the value of our set along with its history, as we plan to pass it on to our children.

A: Hand-painted porcelain dessert sets were very popular in the late 1800s and early 1900s. Around this time, many similar sets decorated with poppies were made in Germany, France and Japan. Without a manufacturer's mark, it can be difficult to identify the maker.

Q: I have enclosed the mark that is on the bottom of an antique teapot I have. It is decorated with rust, blue and cream-colored flowers and trimmed in gold. It was given to my grandmother as a wedding gift sometime in 1930. My daughter would like to have it, and I would like to provide her with more information about its maker, vintage and value.

A: Your teapot was made by Wood & Sons Pottery. They produced earthenware in Burslem, Staffordshire, England, from 1865 to 1981. In 1981, financial troubles occurred; the pottery went into receivership and was taken over by the Edmund Yorke family. "The Alhambra" is the name of the pattern, and the number "739062" shows that the pattern was registered with the British government in 1928. Although the registry date is 1928, it doesn't necessarily mean the teapot was made in 1928: It is the date when the design was registered. The Moorish Alhambra Palace in Granada, Spain, was the inspiration for the design. The name Alhambra appears to be popular with many pottery and porcelain factories from the 1800s to the present, all with different designs.

Dessert set made in Germany. 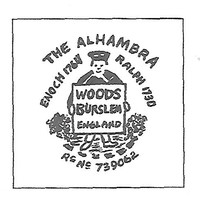