Pottery Was Made in Satsuma Region

Q: I have enclosed a photo of a Japanese vase that sat on my grandmother's mantle in the house I grew up in during the 1930s. There was another vase, but it was broken many years ago. It is decorated with Asian figures, raised white dots, pastel multicolored flowers and geometric shapes. The height is about 18 inches, the diameter is 6 inches, and it is in perfect condition. On the bottom is Japanese writing.

I would appreciate it if you could tell me anything about our vase.

A: You have a Satsuma pottery tankard rather than a vase. A tankard is a tall slender pitcher, not to be confused with a round short pitcher. Satsuma ware was made as early as the 1600s in the Japanese province of Satsuma. A Japanese feudal lord attempted to conquer Korea and failed. He and his army captured 22 Korean potters. They returned to Japan, settled in the Satsuma region and were put to work in potteries. Early pieces were sparsely decorated and looked very different from those made in the late 1800s and early 1900s. In the mid-1800s, potters added human figures, raised enamels, moriage (white dots), more colors and gold trim. There were four periods of Satsuma design. The Edo period lasted from the 1600s to 1868; the Meiji period from the late 1800s to early 1900s; the Taisho period from 1912 to 1926; and the Showa period from 1926 to the present.

Q: This mark is on the bottom of a pitcher that I have. It is decorated with a scene of what appears to be two soldiers in a foxhole, and the background is tan. Below the scene are the words, "Well, if you know of a better "ole, go to it," and the name "Bruce Bairnsfather."

I am puzzled by the scene and the mark. Who was the maker? When was it made? Who were the "Girls of Staffordshire"? Does it have any value? I hope you can solve this mystery.

A: Your patriotic pitcher was made by Grimwades Ltd. in Staffordshire, England. Edward and Sidney Grimwades established their pottery in 1900. By 1913, they operated five potteries and became one of the largest producers of earthenware in the Staffordshire area. The Girls of Staffordshire were the women who decorated the transferware scenes. The scene was inspired by the World War I cartoons of English artist and humorist, Bruce Bairnsfather. 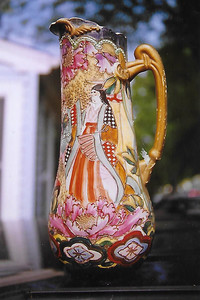 Satsuma ware was made in Japan. 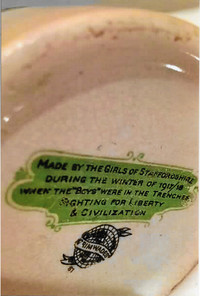 The Girls of Staffordshire were decorators at Grimwades pottery company.