Q: I found the porcelain plate seen in this photo in Pennsylvania some time ago. It is decorated with scrolls of pink roses and gold trim. Four of the six scalloped edges are shaded in green and against a cream-colored background. Marked on the back in red are the letters "L-S-S — Limoges — France" and a green star with the words "Limoges — France." I have been unable to find any information about it on the internet.

Can you help me?

A: The red mark was used by hugely successful importers, L. Straus & Sons, from the 1890s to the mid-1920s. Straus & Sons exported porcelain from both Austria and Limoges, France, to its New York-based showrooms. It also imported glassware and crockery. The green star mark was used by the Coiffe Factory in Limoges, France. It produced blanks (undecorated white ware) that were often decorated by other factories. Straus & Sons also had offices in London, Paris, Berlin and Japan. The Straus family began selling imported objects on concession in the basement of R. H. Macy & Co. in 1873. By 1894, it was part owner, and by 1896, it had become the sole owner of Macy's.

Q: This mark is on a cut-glass vase that my father gave to my grandmother in the early 1900s. It stands about 12 inches tall, is decorated with hobstars and is in flawless condition.

Can you identify the mark, as well as the age and value?

A: H. P. Sinclaire and Company made your cut-glass vase. The factory was in Corning, New York, from 1904 to 1928. Sinclaire began his career with T. G. Hawkes & Company in 1883. There he learned his craft as a designer and glass cutter. Eventually, Hawkes and Sinclaire became business partners until they had a parting of the ways. Hawkes preferred the cut-glass designs, and Sinclaire liked to incorporate engraving in the patterns. Sinclaire and Company bought blanks from other manufacturers, including C. Dorflinger and Sons, and then designed and cut the patterns at its factory. Most Sinclaire pieces are signed; the signatures can be so small that they are difficult to detect. Some cut-glass historians believe the pieces that are not signed are imperfect. 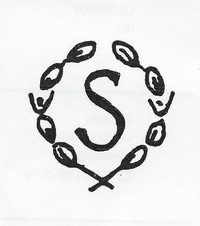