Patriotic Pitcher Was an Inspiration

Q: The pitcher in this photo caught my attention in a junk store in Dallas, Texas, many years ago, probably in the 1950s. It was in the present damaged condition when I bought it, and I'm sure it is worth little or no money at all. My interest is purely curiosity. Marked on the bottom is a globe with the word "Grimades." Above the mark are the words "Made By The Girls Of Staffordshire During The Winter of 1917/18 When The 'Boys' Were In The Trenches Fighting For Liberty & Civilization." Who were the girls of Staffordshire, and why did they have the pitchers made? Perhaps they sold them as souvenirs, or as fundraising for a patriotic cause. It is decorated with a scene of two soldiers in a foxhole in wartime. In case you cannot read the print under the foxhole scene, it says, "Well, if you knows of a better 'ole, go to it." The name "Bruce Bairnsfather" is signed near the lower right hand of the foxhole picture.

Anything you can tell me about my pitcher will be appreciated.

A: Grimwades Ltd. made your earthenware pitcher. The pottery was founded in 1900 in Stoke, Staffordshire, England, by Edward and Sidney Grimwades. By 1913, Grimwades operated five factories and was one of the largest producers of earthenware in the Staffordshire region. The girls of Staffordshire were the women who worked in the pottery and decorated the ware. The scene is a transfer print and was based on the English humorist artist Bruce Bairnsfather's cartoons featuring soldiers of World War I. His inspirational cartoons appeared on teapots, flower pots, sugar bowls, pitchers and plates. Grimwades Ltd. also produced chintzware. The company passed through several hands and is still in business.

Your pitcher is circa 1917. Due to the condition, the value is mostly historic.

Q: I have drawn the mark that is on the bottom of a porcelain cup and saucer my late husband bought for his mother when he was in the service in the 1940s. The cup is 2 inches tall, and the saucer is 4 inches in diameter. The pair is decorated with the image of a man and woman, and trimmed with gold.

Can you tell me who made the set and its value?

A: The crossed-swords mark you provided can be problematic. In 1725, the Meissen Porcelain Manufactory, located in Saxony, Germany, marked porcelain with crossed swords. For over 200 years, a plethora of factories has used versions of the original mark. The mark appears on pieces today. When in doubt, consult an appraiser with a background in Meissen porcelain. 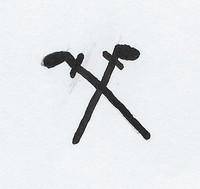