Painting Captures the Beauty of the Southwest

Q: This is a photo of a print of a painting of a Native American. It is on cardboard, measures 14 inches wide by 12 inches high, and has a hole at the top. Marked on the lower border are the words "Copyright 1917 by W. J. Black — The Pueblo Weaver — Grand Canyon Line — From Painting by E. I. Couse, N. A." There is a Santa Fe emblem on the wall behind the weaver. Taped on the back is a printed explanation of the painting. According to this information, the painting represents a young Pueblo man who is weaving a blanket for his soon-to-be bride. It was the custom among Pueblo natives for men to weave blankets and sashes. The older men of the tribe taught them. There is evidence the lower portion of the print has been cut off.

What can you tell me about my print?

A: Based on your information, you have the top portion of a 1917 travel calendar. The Grand Canyon Line was part of the Atchison, Topeka, and Santa Fe Railway Company. The line was between Williams, Arizona and Grand Canyon National Park. The original oil painting titled "The Pueblo Weaver" was painted by Irving Couse. He was one of the founders of the Taos Society of Artists that began in Taos, N.M., in 1915. He captured the beauty of the magical light, brilliant colors and the essence of the native people in Taos. Couse's original paintings are highly desirable and very valuable, and many are in some of the finer museums in the United States. The railway officials commissioned the artists to paint scenes of Native Americans and landscapes that were used on calendars and posters to encourage travel by train to the Southwest. The Santa Fe emblem in the painting represents the railway line. W. J. Black was the printmaker, and the hole at the top was for hanging the original calendar.

Your print would probably fetch $25 to $50 in an antiques shop.

Q: I have enclosed a drawing that I made of the mark that is on a set of dishes that must be over 50 years old. The set is a service for eight and is in perfect condition. Each dish is decorated with flowers that look like Queen Anne's lace. They are pink, green and yellow, with pale brown stems against a cream background. The flower design is offset rather than in the center.

What can you tell me about my dishes?

A: Steubenville Pottery Company made your mid-20th century dinnerware. It was located in Steubenville, Ohio, from 1879 to 1960. The pattern is "Dainty Lace." 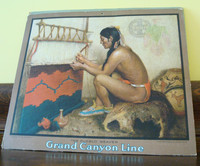 Grand Canyon Line travel calendar was made in 1917. 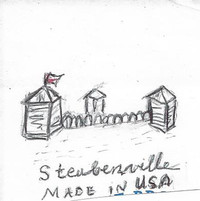 Steubenville Pottery Company was in business from 1879 to 1960.
Address your questions to Anne McCollam, P. O. Box 247, Notre Dame, IN 46556. Items of a general interest will be answered in this column. Due to the volume of inquiries, she cannot answer individual letters. To find out more about Anne McCollam and read features by other Creators Syndicate writers and cartoonists, visit the Creators Syndicate website at www.creators.com