Famille Rose Porcelain Made in China

Q. Enclosed is a photo of a porcelain teapot and a pair of matching cups and saucers. They are decorated with pink flowers, birds and figures against a white background. I inherited them from my grandmother at least 40 years ago, but I know nothing about their history, vintage or value.

Anything you can tell me will be greatly appreciated.

Q: I have provided the mark that is on the bottom of a tall ironstone pitcher. It is cylinder-shaped and decorated with the portrait of a young woman. The glaze is cream that shades to brown, and it has a twig-shaped handle. It is in mint condition and is 10 inches high.

What can you tell me about my pitcher?

A: Warwick China Co. made your vitreous tankard pitcher. It was in business from 1887 to 1951 in Wheeling, West Virginia. Vitreous wares were fired at high temperatures. They produced jardinieres, umbrella stands, pitchers, bowls, dinnerware sets, shaving mugs and garden ornaments. Around the turn of the last century, the factory made at least 10,000 sets of dinnerware a month. Warwick China Co. later added the production of hotel, restaurant and railroad china. They dabbled in bone china after 1940. Their wares were either hand-painted or decorated with decals. A variety of pieces were decorated with brown glazes that shaded to cream and were decorated with images of Native Americans, monks, fraternal motifs and provocative young ladies. The word "IOGA" that is included with the mark was used on these pieces. During the late 18th century and early 19th century, Wheeling had a reputation of being a rough and ready city. It has been suggested the popular portraits of young women were ladies of the night. The ladies worked in an area close to the factory, which gives some credibility to the story. Warwick China Co. is shrouded with mystery. No one has solved the legend of the ladies or the meaning of the word "IOGA." Many documents were swept away in the flood of 1936, and the remaining ones were lost in a fire. 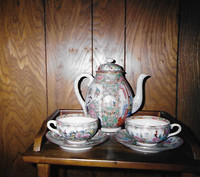 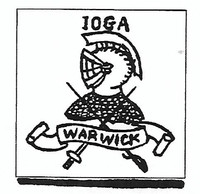