Clock Stands the Test of Time

Q: This is a photo of an antique key-wind brass clock that has been in my family for several generations. It stands at about 10 inches tall, has beveled glass on all four sides and both the front and back can be opened. The face is porcelain and is marked with the letter "A" in a square and has Roman numerals. On the lower portion of the face are the words "Manufactured by Ansonia — New York — United States of America." Also on the back are the words "Ansonia — New York." It is an eight-day clock and strikes on the hour and the half-hour. I have the original key, and it is in good working condition.

Our clock has survived all these years, and I would never part with it, but I would like to know more about its history and value.

A: You have a brass mantel clock that was made by Ansonia Manufacturing. Anson Phelps started out in Derby, Connecticut, in the mid-1800s. The factory moved to Brooklyn, New York, around 1879. By the early 1900s, Ansonia was one of the major clock manufacturers in the United States. In addition to mantel clocks, they produced carriage clocks, figural clocks, kitchen and shelf models. Ansonia did not survive the Great Depression and sold their assets to the Soviet government.

Your Ansonia mantel clock has a crystal regulator and double barrel pendulum and was made around 1910. It would probably be worth $500 to $650.

Q: Enclosed is the mark that is on a set of dishes that I have. The set is in perfect condition and includes four cups and saucers and four dessert plates. They are decorated with burgundy boarders, birds with long tails and flowers. The birds are red, blue and yellow.

What can you tell me about my dishes?

A: Myott Son and Co. made your dishes. The pottery was founded by brothers Ashley and Sydney Myott in 1898. They were located in Staffordshire, England. Based on your description, your dishes are examples of Myott's Chelsea Bird pattern. In 1949, a devastating fire destroyed their pattern books and records. Twenty years later, an American corporation bought the pottery. In 1976, they merged with Alfred Meakin Ltd. They were bought out by Melton Modes and subsequently were taken over by the Churchill Group. 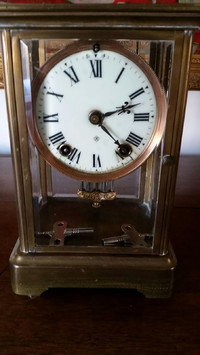 Ansonia brass clock was made in New York.