Q: We have enclosed a photo of a mahogany wood chair that is decorated with unique carvings. We believe it is the face of the North Wind, and it has never been refinished. It originally belonged to our father-in-law's grandmother.

We have been wondering if it has any value.

A: Your side chair was made circa 1900. Wood chairs like yours were often called grotesques. The design appealed to the Victorians who have a penchant for unusual or bizarre carvings. There was an abundance of the chairs decorated with the carvings of the North Wind. Many other chairs depicted scenes of lions, dogs, pubs and griffons. Fables, literature, music and paintings were the sources of inspiration. According to ancient mythology, Boreas, the North Wind, was the son of the Greek god Astraeus. He symbolized the cold wind bringing in the change of season. Grotesques originated in Germany and soon were produced in the United States. Many were made in Grand Rapids and were often made of oak.

Q: I have a vintage porcelain child's tea set. Enclosed is the mark on each dish. The set includes a teapot, cream pitcher, covered sugar bowl and four cups and saucers. They are decorated with an iridescent tan finish against a white background and flowers. I think the set was given to my grandmother when she was a child in the 1930s. The set is in amazing condition considering how old it is.

Anything you can tell me about the set will be appreciated.

A: Porcelain that has an iridescent tan finish is known as lusterware. Vintage porcelain that is marked "Made in Japan" was produced after 1920. Seventh century A.D. Islamic potters discovered the formula for producing luster glazes. By the 19th century, English, German, American and Japanese factories were producing a plethora of lusterware.

Your porcelain tea set would probably fetch $25 to $50 in an antiques shop. 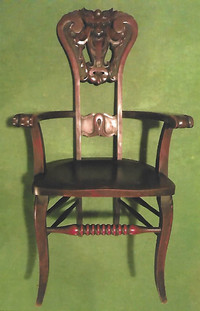 Chair decorated with carvings of the North Wind. 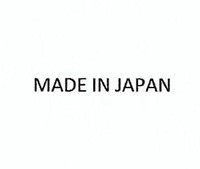 Child's tea set was made in Japan.