Power To the People
Johan Norberg 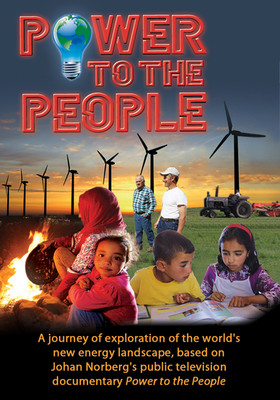 The thirst for energy in developing countries will only grow as economic freedom spreads. People there see how we in the west live and refuse to be left behind. In "Power to the People" Swedish economist and author Johan Norberg explores the incredible challenge this demand presents to man- and woman-kind. As costs rise and concern for climate change increases, these questions loom large: How are we going to maintain our standard of living?

How do we reduce our impact on the planet? And how will we get power to ALL the people?

Based on Norberg's travels for the television documentary “Power to the People,” his investigation peels back the layers of this global challenge, often questioning the conventional wisdom on what works and what doesn’t. His journey starts in the Moroccan bazaars of Marrakech, which functioned fine for eons without modern conveniences, but where electric lights, computers, cell phones and credit card readers are now everywhere.  Even more telling is Norberg’s journey to a remote Berber village in the Sahara Desert. More than half the world still cooks its food over open flames but this is rapidly changing, including here, where women now cook on gas stoves, and some even have refrigerators.

Johan Norberg is an analyst and writer from Sweden.  He focuses on globalization, entrepreneurship, and individual liberty. He is a senior fellow at the Cato Institute and author and editor of several books exploring the global economy and its challenges, including his most recent book, Financial Fiasco: How America’s Infatuation with Homeownership and Easy Money Created the Economic CrisisHis landmark book, In Defense of Global Capitalism,  was originally published in Swedish in 2001, and has since been published in over twenty different countries.  In recent years Norberg has been the presenter and narrator of several public television programs in the United States produced by the Free To Choose Media.  He has been active in the writing and production of these programs including “Free or Equal,” “Europe’s Debt, America’s Crisis,” “Power to the People,” and the upcoming “World of Adam Smith.”

Norberg’s articles and opinion pieces appear regularly in both Swedish and international newspapers, and he is a regular commentator and contributor on television and radio around the world. For his work he has received several awards, including the Sir Antony Fisher Memorial Award and the gold medal from the German Hayek Stiftung. His personal website ishttp://www.johannorberg.net/