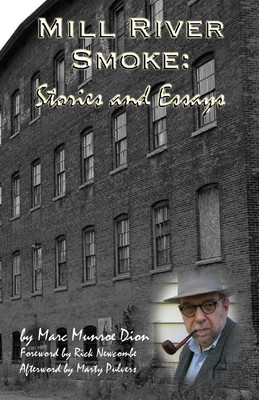 In an age in which a famous Hollywood actor can, without a twitch or twitter, or the slightest fear of being taken to task, remark to an interviewer that he was so eager to heroically portray a man commonly known, by those whose lives he touched in the most direct of manners, as "The Butcher of la Cabana", because he had a "cool" name and a "cool" style of dress, it is easy to tire of the shallow sea of publicized, and then often repeatedly echoed opinions modern communications technology leaves us awash in. There are, however, still a few Marc Munroe Dions rowing about that sea. There's no mistaking that he is, in large part, a writer of opinions, but fortunately for us they are his opinions; untouched by the Hollywood set, the "ivory tower" set of academia, or the pollsters which inform politicians of the season's most fashionable stances. In Mill River Smoke he shares with us essays (opinions) and stories (laced with opinions), which have been kept well-grounded through many years as an old-fashioned newsman working in the largely blue-collar city of Fall River, Mass. covering crime, local politics, and "the stuff on page 3". They've also benefited more than a little in terms of developing a healthy sense of dark humor and for some of life's more film noire-style absurdities.