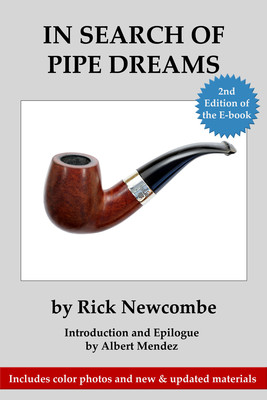 Stories of pipe-smoking's greatest craftspeople intertwine with advice and commentary in these essays on the art of pipe smoking. While exploring pipe craftsmanship worldwide, these writings combine tales of the author's visits to Europe's most prestigious pipe-makers with a look at pipe-smoking's history and the hobby's most famous practitioners, including Albert Einstein, Norman Rockwell, and Mark Twain. Interviews with Old World craftspeople provide insight into the delicate and personal craft of pipe-making, and a treatise on pipe-smoking's relaxing benefits intermingles with advice on how to smoke, buy, break in, clean, and use a pipe to cope with the frantic pace of the 21st century. Includes a 16 page color photo insert.

Creators Syndicate also dominates in the lifestyle category with horoscopes by Holiday Mathis, and advice from Dear Annie.

Creators Syndicate is a multimillion-dollar corporation that has been operating in the black since 1989. Dozens of new syndicates are started every year, but other than Creators Syndicate, the only successful independent syndicates founded in the past 50 years have been Universal Press Syndicate in 1970 and the Hall Syndicate more than half a century ago.

With the newspaper industry in a period of reorganization because of competition from other media, most experts thought it impossible to start a successful new syndication company in recent times. But Newcombe believed that with his enthusiasm and knowledge of the business, he could put together the best staff in the industry and attract top talent by offering them freedom in their contracts. He also believes that "content is king" and that the future is unlimited with digital delivery.

A Phi Beta Kappa graduate of Georgetown University, where he was one of the founding editors of The Georgetown Voice, Newcombe worked as a reporter and editor at UPI for four years. He also studied for his MBA at the graduate business school of the University of Chicago. Prior to college, Newcombe was one of the first graduates of the college preparatory school La Lumiere, in La Porte, Indiana, a few years before Chief Justice John Roberts.

The New York Times once called him “a superhero for cartoonists.”

A native of Winnetka, Ill., Newcombe grew up in a newspaper family. His father, Leo Newcombe, served as senior vice president for the newspaper division of Field Enterprises. He also was business manager and later general manager of the Chicago Daily News and the Chicago Sun-Times.

Newcombe’s primary hobbies are bodybuilding and pipe collecting. He co-authored the book, The Businessman’s Minutes-a-Day Guide to Shaping Up with Dr. Franco Columbu. At the time he helped write the book, Newcombe was working out regularly at the old World Gym in Santa Monica alongside Arnold Schwarzenegger, and he was featured in the April 1992 issue of Muscle & Fitness magazine in an article called “Muscling in on Success.” He is currently writing a book about bodybuilding as the key to a long and happy life.

He contributed to the book, Shoulder Pain? The Solution and Prevention, by Dr. John Kirsch, a highly respected orthopedic surgeon.

Newcombe’s other hobby is collecting rare pipes that reflect Old World craftsmanship. His interest has led him around the world in search of the finest craftsmanship available, and he has written two books, In Search of Pipe Dreams and Still Searching for Pipe Dreams that are both bestsellers in the pipe world and have been translated into Chinese and German for published editions in those countries. They are also available as ebooks and audiobooks in English.

In 2009 his son, Jack Newcombe, joined Creators and is building a digital media company to complement the core syndication business. Creators Publishing offers dozens of ebooks and many audiobooks.

One of Rick Newcombe’s pet projects is to revive the works of the 19th century bestselling author Horatio Alger. Creators has published a dozen of Alger’s books as ebooks, and they include reviews, teacher’s guides, commentaries, a biography and other information related to what they are calling Alger’s “Stories of Success."

Newcombe said he has studied success and motivation his entire life, and in his 60s he says the principles of success are not new but they do work. He says that success in life results from setting challenging goals, assuming only positive results, and being disciplined in one’s work in order to turn dreams into reality. “But the main point,” he says, “is to hang in there — never give up. If you do, you’ll miss 100 percent of the shots you don’t take."