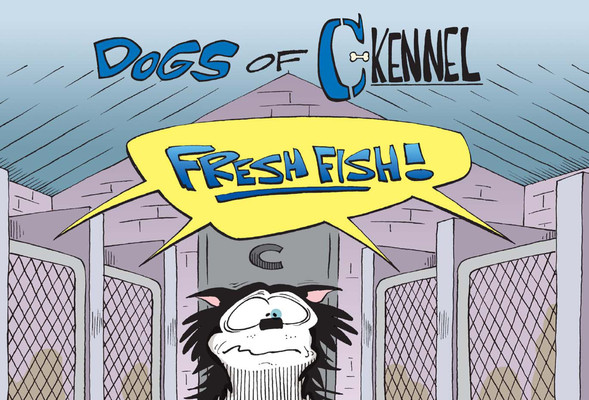 Not Just Another Dog Strip...

Will, a street-wise pit bull, has found himself living in a concrete cell with a large lovable half-wit Husky and a Chihuahua hypochondriac. Join these three motley mutts and the rest of the colorful cast of inmates as they try to maintain their sanity in the west wing of a sprawling animal shelter.

Whether reenacting "Saving Private Ryan" in a snowball fight, enjoying "Fun with Shock Collars Friday" or working on their ongoing wall tunneling project, stolen directly from "Shawshank Redemption," this dysfunctional four-legged family shows us that life in lockdown can be cruel, harsh and usually hilarious!

Born with a rare artistic gift, Mason Mastroianni was seldom seen without a pen and paper as a child. Growing up, he worked to hone and test his passion for art by entering, and often winning, local and state art competitions.

Mastroianni took illustration courses at the Rhode Island School of Design and then enrolled in The DAVE School (Digital Animation and Visual Effects) in Orlando, Florida. Upon graduation, he took a position as a CG animator in Minneapolis, Minnesota. Mason’s work at Wet Cement Productions earned the company an Emmy award for computer graphic animation.

When approached by his brother, Mick Mastroianni, to come on board to illustrate Dogs of C-Kennel, Mason was up to the task. Mason's talent brought a look of professionalism to the strip and new depth and dimension to the characters.

When not illustrating Dogs of C-Kennel, Mason is the B.C. cartoonist and the illustrator of Wizard of Id. Mason currently resides in Madison, Mississippi, with his fiancee and her two children.

Through the National Cartoonists Society and USO cartoonist tours, Mason spends time with the troops at home and abroad.

Mick Mastroianni was born in 1982 in upstate New York. An active child with a passion for cartooning, he was an artist and a dog lover. After high school, Mick traveled to Orlando, Florida, to become a stuntman and precision driver. His efforts landed him a role in an independent film and several TV spots, including a national commercial with Derek Jeter.

While attending stunt school, Mick's passion for dogs led him to volunteer at the Orlando SPCA. Having grown up reading B.C., Garfield and Mother Goose and Grimm books in bed every night, an idea for a comic strip began taking shape in his head. For a year, Mick developed the characters and wrote gags, filling several notebooks with Dogs of C-Kennel comic strips.

Missing home and family, Mick returned to New York to attend college. With his grandfather Johnny Hart as his mentor, Mick continued to round out his characters and ideas. And in February 2007, Creators Syndicate began featuring Dogs of C-Kennel on their web-site as a comic strip in development.

When Hart passed away, Mick's brother, Mason Mastroianni, returned home to take over the duties as B.C. head writer and cartoonist. Mick asked Mason to come on board as illustrator and to help further develop the look of Dogs of C-Kennel.

Besides writing Dogs of C-Kennel , Mick is head writer for Wizard of Id  and a contributing writer for B.C.  Mick currently resides in Binghamton, N.Y., where he has earned awards for his paintings and works of sculpture at Broome Community College.