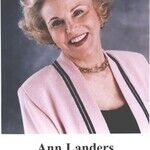 Ann Landers was the most widely syndicated columnist in the world for 47 years. Her column reached an estimated readership of 90 million and appeared in more than 1,200 newspapers.

Born Esther Pauline Friedman, on the propitious date of July 4, 1918, in Sioux City, Iowa, Ann Landers attended Morningside College. She began writing her column on Oct. 16, 1955. Throughout her lifetime, she received honorary degrees from 32 other universities, as well as numerous awards from public and private organizations.

The author of five books and many public service booklets on every conceivable topic, Ann Landers spent many years of her life living and working in Chicago. She augmented her writing career with constant lecturing and was considered one of the most effective platform personalities in America -- indeed, a World Almanac Poll asserted that Ann Landers was the most influential woman in the United States.

In 1980, President Jimmy Carter appointed Ann Landers to serve on the board of the National Cancer Institute for a six-year term, and in 1981, President Ronald Reagan appointed her to the board of the President's Commission on Drunk Driving. She also served on the advisory committee to the director of the National Institutes of Health and, in 1995, was asked by the United States departments of Justice and Health and Human Services to serve on the Advisory Council on Violence Against Women.

In 1985, Ann Landers became the first journalist to receive the Albert Lasker Public Service Award. This prestigious award was presented for her efforts in pressuring Congress to approve millions of dollars for cancer research, and for directing her readers to a variety of health care agencies. In 1971, Miss Landers' eloquent plea to the American people to write to their senators and urge them to support the National Cancer Act generated an unprecedented number of letters to Congress -- more than it had received in its history as a legislative body; more letters even than on the subject of Vietnam. Thanks largely to her efforts, Congress passed legislation to appropriate $100 million for cancer research, and the National Cancer Act became law.

Through her books, booklets, columns and lectures, Miss Landers continually reaffirmed her commitment to the welfare of the individual seeking help and advice. Her column was a popular arena for the free and frank exchange of ideas, opinions and factual information on virtually every topic medical, ethical, personal or sexual.

In her series of booklets, including "Sex and the Teenager" and "The Lowdown on Dope," Miss Landers challenged the public and private taboos surrounding the epidemic problems of AIDS, teenage pregnancy, cocaine and alcoholism, laying bare the myths and hypocrisies and creating a forum for the candid discussion of topics which might otherwise never see the light of public discussion.

Miss Landers died of multiple myeloma on Saturday, June 22, 2002, at her home in Chicago. She is survived by a daughter, Margo Howard, three grandchildren and three great-grandchildren.

Readers who grew up with Ann Landers thought of her as a second mother, and her presence is sorely missed. A new generation can enjoy Miss Landers' wit and common-sense advice in the weekly syndicated column Classic Ann Landers. You can also read more about Ann Landers' life in Margo Howard's tribute to her mother, "A Life in Letters: Ann Landers' Letters to Her Only Child." Editor's Note: Hundreds of Ann Landers' loyal readers have requested that newspapers continue to publish her columns. These letters originally appeared in 1999. Dear Ann Landers: I recently read the letter from the daughter whose mother was lonely, b... Read More

Editor's Note: Hundreds of Ann Landers' loyal readers have requested that newspapers continue to publish her columns. These letters originally appeared in 1999. Dear Ann Landers: When does a father's responsibility to his college-graduate son end? M... Read More

Editor's Note: Hundreds of Ann Landers' loyal readers have requested that newspapers continue to publish her columns. These letters originally appeared in 1999. Dear Ann Landers: I just turned 25, and my mother is trying to marry me off to the son of... Read More

Editor's Note: Hundreds of Ann Landers' loyal readers have requested that newspapers continue to publish her columns. These letters originally appeared in 1999. Dear Ann Landers: I have been married for three years, and it is obvious that my mother d... Read More