'Mrs. America': The Woman Who Tried to Squash Feminism

"Mrs. America," the excellent nine-part series currently midway through its introductory run on FX on Hulu, approaches a still-hot-button political issue in an unusually even-handed way. The subject is the 1970s struggle over the Equal Rights Amendment, or ERA, with lefty feminists pushing to have it installed in the Constitution and right-wing warrior Phyllis Schlafly battling to stop its proponents in their tracks.

Reactions to the series have been impassioned, even among those who hadn't yet seen it. As a critic at the pro-Schlafly DailyWire.com put it, "Early reviews suggest" that the series "paints the social conservative in a most unflattering light." The leftish Vanity Fair waited until actually watching "Mrs. America" to announce in a headline that it "Tells the Villain's Story."

In fact, "Mrs. America" presents a fairly rounded portrait of Schlafly (with the usual history-pic caveat that a lot of the dialogue has been invented). Its clear-eyed assessment of a contentious public figure is a tribute to the series' creator, "Mad Men" veteran Dahvi Waller, and to its incomparable star, Cate Blanchett, who carefully negotiates all of Schlafly's contradictions. She was a tireless campaigner for female submission to husband and home (and had six children herself) but also an author (of 26 books), a congressional candidate and a national-defense expert with a law degree and a steely determination to project her uncompromising views.

Schlafly was a dark-mirror reflection of the angry feminists she so ferociously opposed. Like them, she was repeatedly written off in the world of male action and enterprise. We see her trying to assert her policy expertise in a political strategy meeting and being told by one of the men present to just sit down and take notes for them. Later, passing out some homemade muffins she's made as part of a clever political strategy, she's asked by an appreciative man if she's ever thought about starting a baking business. "No," she says, after giving the question about two seconds' contemplation, "I've never thought about that."

But it's Schlafly's opponents who receive the series' most detailed examination. We see that Ms. magazine editor Gloria Steinem (glowingly portrayed by Rose Byrne) is a casual bohemian with a painful secret in her past, and that she's resisting calls to become the pretty, press-friendly face of the feminist revolution. We meet the abrasive Betty Friedan (a fierce Tracey Ullman), author of that movement landmark book "The Feminine Mystique," who's been cast aside by her husband for a younger woman; and the flamboyant congressional activist Bella Abzug (Margo Martindale, superb yet again), who's determined to convince fiery black Democrat Shirley Chisholm (a rousing Uzo Aduba) to give up her presidential bid against George McGovern — the preferred candidate of the movement's middle-class white feminists. It could be said that intersectionality starts here.

The cast is filled with familiar faces, which gives the series a rich texture. John Slattery plays Phyllis' staunchly anticommunist husband, Fred Schlafly (he's convinced abortion is part of the commie plot to promote population control). Jeanne Tripplehorn is Phyllis' lonely middle-aged sister-in-law ("Why didn't anyone marry me?"). And Ari Graynor brings a surge of emotional energy to the role of Brenda Feigen Fasteau, an American Civil Liberties Union lawyer whose open marriage is unsettled by her sudden lesbian awakening. ("That's practically a rite of passage for a radical feminist," says her proto-woke husband, played by Adam Brody.)

The story begins with Phyllis, a Goldwater Republican, paying little attention to the ERA, even though it's been ratified by 28 of the 38 states it needs to become law. She becomes alarmed, however, by what she sees as the possibility that the proposed amendment could lead to the drafting of women for military service and the end of separate restrooms for men and women, among other things. She starts an anti-ERA group called STOP ("Stop Taking Our Privileges") and begins drawing a national following. "The feminists think it's settled," she says. "They're not expecting a fight." Phyllis and her pro-family adherents are angered by feminist slogans like Friedan's "Marriage is a comfortable concentration camp." Says Schlafly, "They think if you don't feel enslaved you must be dumb."

The series manifests an uncommon sophistication in showing us that both Schlafly and Steinem are beginning to worry about their respective movements. When one woman at a STOP chapter meeting expresses admiration for a conspiracy-mongering right-wing group, the John Birch Society, Phyliss tells her, "Keep that to yourself" (although Schlafly had her own ties to the Birchers, something she long denied). She's even more taken aback when another of her followers says, "The Lord made men and women different, just like he did white people and the colored." Meanwhile, we find Steinem observing a boisterous feminist cabaret show in which anti-marriage sentiments are in the air and the central prop is a large fake penis. "This is why they hate us," Steinem mutters.

It can't be a spoiler to reveal that Phyllis Schlafly finally did prevent the ERA from being ratified, although it was close (the feminists won 35 states to their cause, out of the necessary 38). An ever-evolving feminism went on to soak deep into American culture. But Schlafly's brand of hard-edged right-wingery proved influential as well. The last of her many books, published in September 2016, the month she died, was titled "The Conservative Case for Trump." 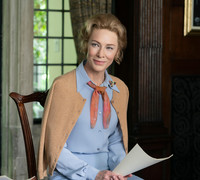