Out on the road one day, a woman named Fern (Frances McDormand) is listening to another woman — a wandering "vandweller" like herself — telling a story about a friend she once had. He was a man who worked for 20 years at a soul-shriveling corporate job, forgoing luxuries and squirrelling away money to eventually buy a boat so he could retire into freedom one day. That never happened, though — he died of cancer instead. "He missed out on everything," the woman says.

"Nomadland," the third feature by writer-director Chloe Zhao, has a warm, womblike intimacy. Many scenes were shot during the pre-dawn or post-sunset "golden hour," lending the desert settings a placid glow. With the exception of McDormand and David Strathairn, playing another of the new American nomads Fern meets in her wanderings, the movie — which is based on a nonfiction book by journalist Jessica Bruder — is substantially populated by non-actors, who give the film a feeling of real life unfolding (a tribute to Zhao's uncommon skill with amateur performers).

Fern is a Nevada widow who's knocked sideways when the gypsum-mining company that sustained her town goes bust (and the town soon loses even its ZIP code). Selling off the effluvia of her life, she buys a van and sets out to see the world — or at least more of it than she ever made time to see before. Soon she discovers there's an extensive tribe of people like herself — middle-aged, searching for purpose — people who find guidance for their new lifestyle in the books and YouTube channels of camper/RV guru Bob Wells (who appears in the movie as himself, making social observations like "The Titanic is sinking"). These people keep their minimalist lifestyles going by taking temporary jobs along the way, and we see Fern cleaning restrooms, harvesting beets, working as a short-order cook and boxing shipments at an Amazon fulfilment center. ("It's good money," she says.)

Fern makes the acquaintance of another refugee from the real world, a shy, gentle guy named David (Strathairn). They keep encountering each other at various stops along the nomad routes. (The movie was shot in, among other places, California and the Badlands of South Dakota, as well as at the Rubber Tramp Rendezvous, Bob Wells' annual vandweller gathering in Arizona.) David is clearly attracted to Fern, but she seems to have no interest in a romantic connection. Nevertheless, when David's grown son asks him to come to his home so David can meet his grandchildren and David asks Fern to come along, she hesitantly agrees. This interlude, delicately conceived by Zhao and acted by McDormand, includes a scene in which Fern — who has no children of her own — is suddenly handed a baby to tend to, and we see twitches of emotional confusion passing across her face, like the pastel clouds that drift across the big desert sky above.

The movie also has casual elements that, in another picture, might have been explained to death. We get a fleeting shot of Fern playing the flute in her van — an unexpected talent that hasn't been mentioned before and won't be again. We hear a polar-bear report on a van radio. There are also moving epiphanies: A woman with brain cancer remembers seeing a beautiful moose and an explosion of sparrows one day and recalls her thoughts. "I felt like I'd done enough," she says. "My life was complete. If I'd died right then, at that moment, it'd be perfectly fine."

As the movie very quietly proceeds, we begin to get the feeling that, despite the rigors of the road (the freezing cold, the flat tires, the unanticipated mechanical expenses), Fern might not be coming back from it. When a girl in a store sees her in her baggy jeans and cheap hoodie and asks her if she's homeless, she says, "No. I'm houseless. Not the same thing, right?"

("Nomadland" is now playing in theaters and on Hulu.) 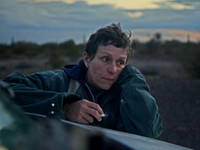