How Small Cities and Towns Can Right Their Ship

ERIE, Pennsylvania — Several large pieces of cobalt-blue glass panels bearing "Don't Give Up the Ship" and a bold likeness of Commodore Oliver Hazard Perry lay broken at the top of the third-floor stairs of the old Park Place building in the city's main square.

If ever there were a motto that exemplified a place and her people, it would be those five words Perry had stitched on a flag — words that inspired him over 200 years ago when he bore the flag in his unlikely defeat of the British at the Battle of Lake Erie.

Given everything this town has gone through — from her heyday as the industrial powerhouse of the Great Lakes to a city bleeding people, jobs and opportunity — finding this inspiring reminder in a building that used to produce "Carter's Little Liver Pills" brought into focus the city's effort at rebuilding.

John Persinger and Matt Wachter could live in any other city in the country and prosper quite nicely. Instead, the CEO and vice president of finance and development are the founding leaders of the Erie Downtown Development Corporation. They, along with Tim NeCastro, CEO of Erie Insurance, the city's largest employer, have committed themselves to not give up the ship but to stabilize and rebuild it.

All three men are standing along a row of century-old buildings on North Park Row. The bones are good, but the buildings have all seen better days. The three men are discussing the projects they already have underway. These are projects meant to spark a cultural and culinary center, which they hope will in turn lead to a citywide metamorphosis.

"This is Perry Square. This is the heart of downtown. It's often been called the 'beating heart,' but we're not sure how much it beats these days because there's not a whole lot of activity," he said of the boarded-up buildings and scant pedestrian activity.

Here's the odd thing: The moribund heart is surrounded by an arc of life. "UPMC Hamot campus is a few blocks away," Persinger explains, "where they (are) putting in a new $111 million patient tower."

There's more: "Erie Insurance employs 3,000 people right there. They're building a new office building. You can kind of see it over the tree line."

Erie Insurance has been here for 94 years. NeCastro jokes he hasn't been here for quite that long, but he is a son of Erie. "I was one of six kids. My father died when I was seven, and my mother found herself working as a waitress at three different places to keep food on the table. ...

"I walked to grade school here. I walked to high school, and I even walked to college," he said of his education at Gannon University.

NeCastro says he left for other opportunities after college but wanted to find his way home. That happened when an internal auditing job opened up at Erie Insurance. Twenty years later, he worked hard "and sometimes too much" to reach what they call the C-suite.

Except he's one of those CEOs who shop in the same grocery store as their employees and customers — and whose proverbial "C-suite" is street-level.

"The recovery of this city is extremely important to us at Erie Insurance because we're the largest employer here. If the city goes to hell in a handbasket, who's going to want to come work for us here?" he said.

This is where Persinger comes in.

In 2018, a few months after Persinger ran for mayor and lost, NeCastro was casting about in frustration, seeking a CEO to lead the Development Corporation.

"So I called him," NeCastro says of Persinger, "and said: 'You wanted to be mayor because you wanted to make a difference in the city. Well, what if you could make a big difference, but you don't have to worry about the police department, the fire department, the streets, the picking up the garbage, all that stuff that goes with it?'"

"Now a year and some change later, the EDDC has become one of the first cities in the country to attract investment to an Opportunity Zone, a 2017 federal jobs act designed to spur investments in low-income communities," he explains.

They've purchased eight properties surrounding Perry Square and have raised over $30 million in financing for their projects, which include retail as well as downtown housing.

They are both the kind of people who are called to serve the community, which happens to include the poorest ZIP code in the state. These are the guys dedicated to not giving up the ship. 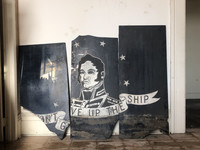 ERIE, Pennsylvania — Shattered remnants of Commodore Oliver Hazard Perry's infamous motto, "Don't Give Up the Ship," at the top of the stairs of a 100-plus-year-old building under reconstruction.