The Forgotten Counties Will Make Their Voices Heard

JOHNSTOWN, Pennsylvania — Ken Miller walked into one of the four storefronts on the right flank of the Richland Shopping Center, asked if this was where he could change his voter registration, sat down with a purpose and began to fill out the form.

"It is time to go," he said flatly as he checked his Pennsylvania driver's license number to place on the form.

Miller did not vote for Donald Trump in 2016; he didn't vote for Hillary Clinton either. He is a retired insurance manager and does not like what he sees coming from the party he has been a part of his adult life. "I just get tired of the game playing that the Democrats are doing," he says. "Everything's just so disgusting today. Something has to change. Well, something's going to change."

"I'm afraid something's going to break out here, and I'm pretty sure it will," he said. He's concerned that what happened to patrons having dinner at an outside cafe in Pittsburgh, when protesters swarmed them, will find its way here and other bucolic settings across the country.

Miller is not alone. For the first time anyone can remember, Cambria County is no longer dominated by Democratic voter registrations. It lost that dominance quietly on Labor Day weekend when Pennsylvania Department of State registration numbers showed Republicans having 37,951 registrations and Democrats holding 37,826.

Four years ago, Democrats still dominated by 12,000 registrations. Eight years ago, it was nearly double that. Despite the lead in registrations, both Trump and Mitt Romney prevailed over their Democratic rivals in this county.

Cambria was one of 10 counties — part rural, part post-industrial, like Washington County, Luzerne County and Erie County — that helped Trump eke out a victory in Pennsylvania, the first GOP candidate to win the Keystone State since 1988. Republican-supporting voters turned out 9% to 10% higher for Trump than they did for Romney, numbers that offset the larger Democratic-dominated populations of Pittsburgh, Philadelphia and Harrisburg.

For an outsider, this may not seem to be a big deal. A small-population county flips Republican. Who cares? Larger-population counties, such as Chester County in suburban Philadelphia, are now marginally more Democratic than Republican. Isn't that where the focus should be? The short answer is maybe. The longer answer is that our political coalitions have changed and our focus has been on the suburbs, the comfortable class. But what if the little guy makes the difference?

For generations, Cambria County has been synonymous with working-class, blue-collar Catholic laborers who went down into the coal mines that powered our country and into the steel mills that built our country. They worked hard, hunted and fished for their food, served their country, played hard and went dutifully to church with their families every Sunday to atone for their sins.

This is the home of the late Jack Murtha, the Democrat who was the first Vietnam War veteran to serve in Congress, and who held his Johnstown-based seat from 1974 until his death in 2010. The fact that it's now considered a safe Republican seat says more about the pillars of our political parties than anything about the people of the district.

Jackie Kulback was at the Cambria County Republican Party headquarters where Miller was filling out his forms. He was not the only one changing his registration, as dozens of other people were lined up to do the same thing. Others picked up signs and bumper stickers or signed up to volunteer for a variety of functions.

Kulback said that a handful of Cambria Republicans got together and decided to do something about the one thing they were very good at: losing elections. "We were experts at that," she said laughing. "We had struggled to get good candidates to run, if at all. There were times where we had nobody running for some of our offices. So, we just put together a strategic plan, and the focus was making sure that we gave anybody who wanted to run a fair shot at running. And we also, on top of that, really worked hard at voter registration."

Seven years later, a Republican presidential candidate and Senate candidate, Pat Toomey, won the county. So have two Republican members of Congress who represent the county. Republicans also now have two state House members who are running unopposed in November and half of the county row offices.

Kulback said for counties such as hers to help Trump over the line, they not only have to hit the 2016 numbers but also exceed them.

As the line formed for people to enter the storefront, Kulback's goals did not appear out of reach. Democratic nominee Joe Biden needs to cut in and win back some of this rural vote to win the state, while Trump needs them to hold their enthusiastic 2016 numbers and push for 1% more.

Whoever does win, the story cannot just be about the suburban voters and their needs being met. Rural voters will still be here, and it is hard to imagine they will ever let both political parties' establishments forget them again. 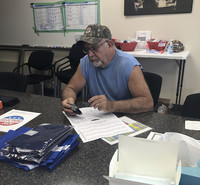