RUSSELLTON, Pennsylvania — The anti-bullying message that Hollywood actor Trevor Donovan delivered at Deer Lakes Middle School in a rural industrial patch of Western Pennsylvania resonated with the 2,400-plus students who attended the program.

It had earlier caught the attention of Hallmark, where Donovan has enjoyed a robust and loyal fan base for his appearances in several of the Hallmark Channel's popular seasonal movie productions. Recognizing the powerful impact of Donovan's candid retelling of his experiences and the empathy he projected to the children, Hallmark put its brand behind his effort and sponsored his anti-bullying message in schools across the country.

Donovan said the assembly was designed to illustrate in real time the personal effect bullying has on people, as well as to emphasize how to use social media positively and not as a sledgehammer to someone's reputation and sense of well-being.

A Pew survey showed that nearly 60% of the nation's teenagers experienced abusive online behavior through the various platforms of social media. Today, there is no clock giving children relief they used to have from bullies when they went home from school.

Donovan was also candid with the children about the experiences he had at their age, coping with his natural introverted nature and the bullying that it attracted.

"When you are young and bullied, your gut reaction is to just withdraw from activities and even people," said Donovan.

Cyberbullying is relentless, Donovan explained. "You cannot escape it, and as a kid, you could feel as though you are surrounded, from the vicious messages sent directly to you to the disparaging content about someone's reputation," he said.

According to the U.S. Department of Health and Human Services, more than 49% of children in grades four through 12 report being bullied by other students at least once a month, and 31% report bullying others.

Donovan's program wisely addresses both the targets of bullying and the instigators.

This spring, Hallmark plans to provide 100,000 greeting cards to 2,000 high school and middle school teachers and administrators across the country as part of the company's partnership on the Ad Council's "Because of You" public service advertising campaign, which addresses teenage bullying. Donovan will join Hallmark at two of these schools, where students will be encouraged to identify someone who has helped them or who needs help and write a card to this person to recognize him or her. Students will discuss the experience of using their words for good and how even the smallest actions, such as giving a card, can have a profound impact on others.

AdCouncil reports: "The Ad Council launched a new film, 'A Message From the Future,' as part of the Because of You campaign, a public service advertising campaign that addresses teen bullying. The new work encourages teenagers to consider the long-lasting impact of their actions, in a culture where meanness is normalized, to create a more empathetic, inclusive community."

Later this year, in partnership with the Ad Council, Hallmark will release videos from the high school visits as part of the "Because of You" campaign to inspire other students to use cards as a way to fight bullying and tell others that they matter. 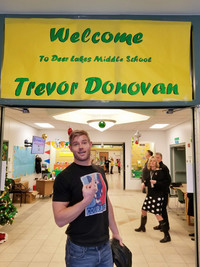 Trevor Donovan to partner with Hallmark to launch nationwide anti-bullying program he inspired.