Given that the Mitsubishi Eclipse Cross costs a bit more than its better-equipped rivals — models like the Subaru Crosstrek and Honda HR-V — and given that it's a bit less roomy, is there any sound reason to consider buying one?

There's a big one, actually.

The big one is the fact that it's a Mitsubishi, which can benefit your pocketbook.

Subaru and Honda — and the other big names — negotiate from a position of strength. They have buyers lined up out the door, and if your offer isn't high enough, the dealer knows he can wait for the next buyer to make a better offer.

Mitsubishi, on the other hand, is fighting hard for market share. The company is fighting to get noticed by prospective buyers, many of whom aren't even aware the Elcipse Cross exists.

Or that Mitsubishi does.

That means your local Mitsubishi dealer is much more likely to be willing to ... deal.

Oh, and that other thing?

The Eclipse Cross is a compact-sized, five-door crossover SUV that's similar in layout and size to others in this class, like the Subaru Crosstrek and the Honda HR-V.

This is something that neither the Subaru Crosstrek nor the Honda HR-V offer — no matter how much you offer.

That's the other thing!

A top-of-the-line Eclipse Cross SEL with all-wheel drive stickers for $28,595.

But what you end up paying will likely be much less.

The Eclipse Cross is a new model from Mitsubishi that resurrects an old name — the Eclipse part. That was the name of Mitsubishi's two-door sports car, which Mitsubishi doesn't make anymore but hopes will convey sporty memories.

The Cross part is meant to convey the obvious — or desirable — when people shop crossover SUVs.

Thus, a sporty crossover - and one with a name instead of another number.

But it makes 152 horsepower — the same as the Subaru's larger 2.0-liter engine and more than the Honda's 1.8-liter engine (141 horsepower) — and much more torque (the twisting force that gets a vehicle moving).

The Eclipse Cross feels much stronger than its rivals in stop-and-go driving especially, where it has the advantage of that turbo-boosted torque.

It also feels more planted on the highway, probably because it's heavier and lower to the ground.

Mitsubishi gave it 8 inches of ground clearance — not quite as much as the Crosstrek's class-leading 8.7 inches but enough to be good in the snow without getting too much air underneath it (the enemy of stable handling at highway speeds).

The Eclipse also has longer highway legs than some of its rivals due to its nice big gas tank (16.2 gallons).

Crossovers are bought mostly for their utility, not their individuality. Here you get a bit more of the former — in exchange for a bit less of the latter.

Dramatic upward-arcing swoosh lines are stamped on each side that meet to form the ends of a flying-wing, single-piece rear spoiler that will make it easy to find your Mitsubishi in a parking lot full of other crossovers.

But — as with the gas mileage — it's not a huge difference.

Unfortunately, you can't haggle over the Eclipse Cross' certain desirable options — like the heated rear seats and the Rockford Fosgate audio rig — which are only available with the top-of-the-line SEL trim.

It's not the go-to model in the segment, but it's one well worth going to see. 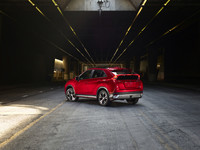 Eric's new book, "Don't Get Taken for a Ride!" is available now. To find out more about Eric and read his past columns, please visit the Creators Syndicate webpage at www.creators.com.