Q: The table in this photo is made of walnut and was given to my mother by a dear friend, who is now 96 years old. So many coats of white paint covered the table that it was not possible to see the eye of the bird. In fact, we didn't even know it had an eye. Many of the table's lovely details were uncovered when my mother refinished it. The approximate measurements are 24 inches high, 25 inches wide and 13 inches deep. Regretfully, there is not a furniture manufacturer's stamp, nor are there identifying marks of any kind to assist us in learning about the table's history. Mother's friend told her the table belonged to her mother-in-law, who was from Missouri.

Could you share any information, history and value about the table?

A: You have an example of an early 1900s demilune table. Translated from French, "demilune" means "half-moon." Many refer to the tables as "consoles" or "half-tables." Similar tables were often placed in hallways or small areas. The carved eagle was a popular motif in the late 1800s and early 1900s. Without any documentation of the maker, it can be impossible to identify the manufacturer.

Q: I have drawn the mark that is on a set of china I have. It was purchased in Japan in 1951. It is a service for 12 that includes extra serving pieces. Each dish is decorated with a Japanese landscape of a pagoda and winding path, gold trim and a white background. The dishes are hand-painted in shades of black and gray. The set is in excellent condition.

I would appreciate your opinion of its approximate value.

A: The mark you provided was used by Koransha, or "the company of the scented orchid," in Japan. It was founded in 1856 by Ezaiemon Fukagawa. Porcelain has been made in the Arita area of Japan since the 1600s; it was a region teeming with white kaolin clay. Fukagawa's porcelain was fired at very temperature and is considered to be exceptional quality. His company was a supplier of porcelain to the Japanese Imperial House. The pattern is their 903.

The value of porcelain brought back to the United States in the 1950s has diminished in recent years. Similar sets are selling in the range of $400 to $800. 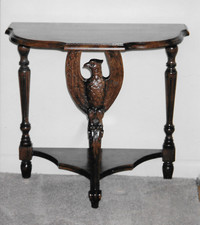 Koransha was founded in Japan in 1856.