Q: I inherited this bowl from a relative. He said it was not made by Wedgwood. It has the look and feel of a Wedgewood, though the decoration appears to be thicker than that of Wedgewood pieces I have seen. It is in relief, it is ornate, and it has faces that hide the feet. An antiques dealer told me it was made by a German factory in competition with Wedgwood, although the lead did not pan out. On the bottom of the bowl is the number "15 — 3003." The bowl is 6 inches wide and about 3 inches tall.

Do you have any thoughts or guesses on the history of this bowl?

A: You have a jasperware bowl. Jasperware was developed by Josiah Wedgwood in England in the 1700s. It is matte, unglazed stoneware or porcelain decorated with applied white ceramic decorations like classical scenes from Greek mythology. The backgrounds were available in matte blue, lilac, black, yellow and green. Jasperwares included plaques, vases, cameos and decorative items. Although your bowl is decorated with cupids, it doesn't have the appearance of Wedgwood jasperware. The decoration seems heavy and lacking the exceptional Wedgwood work. Many jasperware pieces were also made in Germany and France. Your bowl is similar to the work of Schafer & Vater, a German porcelain factory. And the numbers are design/mold marks.

Q: This is a mark on a set of porcelain dishes that I am thinking of buying. I saw the set at an antiques mall and would like to know more about the vintage and value before I decide whether to purchase. Each dish is decorated with pink flowers and gold trim. The person at the front desk said the pattern is Azalea. The set is a service for eight; it includes two serving platters, a vegetable bowl, a cream pitcher and a sugar bowl. The asking price is $325.

What can you tell me about this set?

A: Noritake China Co. located in Japan made the Azalea pattern from the early 1900s till around 1941. The pattern was produced exclusively for the Larkin Company in New York. The letter "M" in the mark represents New York importers The Morimura Brothers. The number "19322" is the pattern number. The dishes were premiums that were given to Larkin customers.

A service for eight in the Azalea pattern would probably be priced between $275 and $325. The price given at the antiques mall is a fair market value. 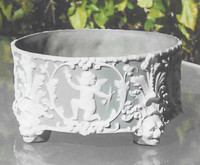 Jasperware was developed by Josiah Wedgwood in the 1700s. 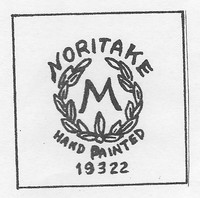 Azalea pattern was made by Noritake China Co.
.