Q: I have enclosed a photo of a monk figure that was given to me many years ago. It is made of some type of brown, bronze-colored stone and is slightly heavy for a figure this size. The monk is seated and holding a book in his hands. It is on a platform about a quarter-inch high, and the overall height is almost 8 inches. Impressed into the base are the words "M. V. D. Meulebroucke." On the bottom of the piece are the words "Made in Belgium."

I would like to know the history and value of my figure.

A: You have a figure of a medieval monk made by Marcel Van de Meulebroucke. He was a Belgian artist, sculptor and restorer born in 1902. Your figure is half of a plaster cast bookend. Van de Meulebroucke produced images of saints and folk figures. He died in 1992.

Your early 20th century monk figure bookend would probably be worth $25 to $50.

Q: This mark is on the bottom of set of six blue-and-white cups with matching saucers. They are decorated with scenes of ancient churches and a background of trees and foliage. The borders of the saucers are wide, with blue-scrolled cartouches.

What can you tell me about my cups and saucers?

A: You have a set of "Flow Blue" cups and saucers made by George Jones & Sons. The company made earthenware, porcelain and majolica in Staffordshire, England, from 1861 to 1951. Flow Blue is a term for blue-and-white porcelain, semi-porcelain and stoneware pieces that have a blurry finish rather than a crisp pattern. The color appears to have bled or flowed onto the white surface during the firing. The process began in Staffordshire in the 1820s. The "Abbey" pattern was a transfer print of a 1790 engraving. Potters liked transfer prints because they could be used over and over. It was much cheaper and quicker than hand-painting objects. The pattern was also known as "Abbey Wreath" and made by William Adams and Co. in the 1840s. George Jones & Sons made this pattern from 1864 to 1907. It was also available in a red transferware print. 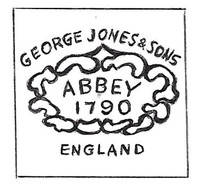 "Abbey 1790" was a pattern used by several English potters.