Sevres China Set Made in Ohio

Q: Enclosed is a photo of a hot chocolate pot with six matching cups and saucers. Each piece is decorated with berries, leaves and gold against a white background and marked with the word "Sevres."

Any information you can provide will be appreciated.

A: Sevres China Company made your hot chocolate set. It was located in East Liverpool, Ohio, from 1900 to 1908. The pottery had a series of names, beginning with Agner, and then Fouts and Co., and then Agner and Gaston. In 1887, it was the Sebring Pottery, and finally it became Sevres China Company. It produced semi-porcelain hotel ware, dinnerware, and tea and hot chocolate sets.

Q: This mark is on the back of a set of porcelain dinnerware that I inherited. The set was a wedding present to my parents in 1955. It is a service for eight, incudes serving pieces and is in perfect condition. Each dish is white and trimmed in gold.

What can you tell me about the maker, age, pattern and value of my dinnerware?

A: Rosenthal Glass and Porcelain Company was established in 1879 in Selb, Bavaria, Germany, by designer and industrialist Philipp Rosenthal. It produced high-quality porcelain dinnerware and glassware. Although the company began as a family business, it was sold several times and is now Rosenthal GMBH. It can be very difficult to identify the pattern. You could try contacting the Rosenthal factory, but doing so is frequently unsuccessful. Some collectors attempting to learn the name of their pattern have sent photos of their dishes and the marks to porcelain replacement services on the internet.

Q: What can you tell me about Arm & Hammer bird cards? My grandmother collected them and later passed them along to my dad, who gave them to me. The earliest ones have a "1915 Church & Dwight Company, New York" copyright.

Is there any value to them other than sentimental?

A: Arm & Hammer packaged the cards in its baking soda containers in the early 1900s. It was a promotion to encourage shoppers to purchase Arm & Hammer products. It also offered a fish series, an animal series and a flower series.

These are collectible, and sets can be seen selling on the internet in the range of $25 to $150. 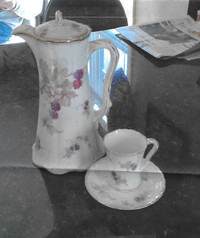