Antique Desk Is Something to Write About

Q: The antique desk seen in this photo was handed down to my parents and then to me a long time ago. I am 95, and I have never been able to find any information on the style, era or manufacturer. The desk has carved pulls and decorative wood spirals along the front and straight legs. There are keyholes in each drawer as well as on the top. When it is opened, a writing surface, a small drawer and pigeon holes are revealed. The desk has the original finish and is in mint condition. I still use the desk to write letters and pay bills.

I would never part with my heirloom, but I would appreciate any information you can provide.

A: Your desk was made in the very early Victorian era before the onslaught of heavy ornate designs, which dominated the period. The fall-front desk opening, the turned pilasters flanking the three drawers that graduate in size, the carved pulls and plain short legs represent very early Victorian design. It can be difficult to identify the maker.

Q: This mark is on the bottom of an antique vase I have. It stands about 5 inches tall and is decorated with a matte blue glaze. The top of the vase is round and has been pinched inward. The vase is marked on the bottom with block letters pressed in the clay.

What can you tell me about Camark, the vintage and value of my vase?

A: Your vase was made by Camark Pottery. Samuel Carnes founded his pottery in 1926 in Camden, Arkansas. In the beginning, he produced art pottery similar to Weller Pottery. John Lessell was one of the talented artists employed by Carnes. He worked with iridescent and luster glazes, which proved to be so successful. Lessell died unexpectedly one year after he was hired. Carnes quickly brought Lessell's wife, Jennie, and daughter, Billie, into the pottery. They were experienced in the luster and iridescent techniques. In the mid-1930s, monochromatic glazes began to replace their luster, drip and iridescent finishes. By the 1950s, they were drifting away from creative art pottery and into mass-producing cheaper products for florists and giftware. In 1966, Carnes died, and the pottery soon closed. The block-letter mark was die-stamped into the clay and used from 1928 to the 1930s.

Similar vases have been offered on the internet in the range of $50 to $75. 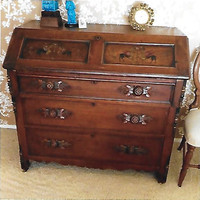 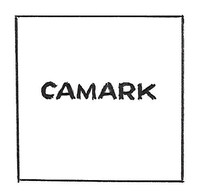 Camark Pottery was located in Arkansas.