Q: Enclosed you will find a photo of an antique red glass Christmas ornament. It is 3 inches in diameter and lined with silver. It weighs 1 pound and was made in Germany. There is an embossed brass top with a loop for hanging. It is not just any ornament; it is an heirloom that has been passed down through our family from my great-grandparents who came from Germany around 1872. I'm sure there were more, but they were likely broken by my grandmother's siblings over the years. I know it probably isn't worth much, but just learning about its history and value means a lot to me.

A: German glass ornaments that are lined with silver are known as "kugels," the German word for "balls." They were available in a variety of shapes, including fruit shapes.

Q: This mark is on the bottom of a planter that belonged to my grandmother. It is in the shape of a leaping antelope. It stands about 9 inches tall and is in perfect condition. I have fond memories of seeing it on top of her TV.

What can you tell me about the maker, vintage and value?

A: William Maddux founded Maddux of California in 1938 in Los Angeles. In the 1940s, a plethora of small, often family-owned potteries were launched in Southern California. Due to importing restrictions during World War II, department stores became dependent on giftware made in the United States. In the 1950s, imports were flooding the U.S. once more. The abundance of post-war imported inexpensive giftware forced many potteries out of business. Maddux of California produced giftware, florist containers, decorative figures, gardenware, birds and TV lights. In 1947, it was making at least 120,000 pieces. The number "59" represents the year 1959, when your planter was made, and "149" is the design number. Antelopes, gazelles and deer were favorite motifs of the potteries. Maddux of California lasted longer than many of the potteries. It closed in 1980. 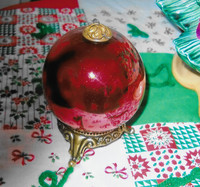 Kugel glass ornaments were made in Germany. 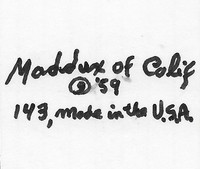