Q: Enclosed is a photo of a memorial hatchet that is 12 inches long by 4 inches high. On the side are the words "Washington Inaugurated President 1789 of the US." There is a date before "1789" that is no longer readable. The hatchet appears to be made of wrought iron and "braised" with copper. It was passed down to me from my grandfather, Theodore Weber, who lived August 1870 to January 1966. He said it was made for the 100th anniversary of George Washington's inauguration. I have had the hatchet in my possession for approximately 25 years, and I know our family would love to learn the authenticity and value of the mainstay of my grandfather's memorabilia.

A: You are correct. Your cast-iron hatchet was made in 1889 to commemorate the 100th anniversary of Washington's inauguration. The date that is illegible is "April 30." Washington was inaugurated on April 30, 1789, in Federal Hall, New York City, the first national capitol. These hatchets were made in cast iron, copper, bronze and glass. The holes at the top are for hanging.

Q: I took a photo of the mark that is on the bottom of my Roseville vase. It is a small jardiniere and is decorated with leaves and berries against a textured green background. It has small handles and is in mint condition. The diameter is approximately 4 inches, and the height is 3 inches.

The jardiniere was given to me by a friend who is an antiques collector, and I would like to know more about its age and value.

A: Your jardiniere is an example of Roseville's "Bushberry" pattern. Roseville Pottery started out in 1892 in Roseville, Ohio, making flowerpots and cuspidors. Around 1898 they expanded their lines to include decorative pottery and moved to Zanesville, Ohio. The area was teeming with natural gas deposits and clay, making it a natural for potteries. Zanesville became known as "Clay City." "Bushberry" was introduced in 1941. It was decorated with three-section leaves with saw-toothed edges and clusters of small berries in relief. All pieces had ribbed textured backgrounds and were available in tan, green, blue and brown matte glazes. The number "657" on the bottom is the design number, and the "3" is the height.

Your jardiniere can be seen selling online from $75 to $125. 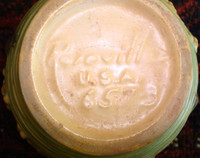 "Bushberry" pattern introduced by Roseville in 1941.