Q: I have enclosed a photo of a washbowl and pitcher. The set also includes a large tureen with a lid. Each piece is decorated with sprays of pastel flowers against a white background that shades to green. The edges are trimmed in gold, and there are handles on the tureen. On the bottom of each piece is an eagle in a circle with the words "Semi Vitreous Porcelain." Also, there are letters that are blurry, but I think they are "K L G N."

Can you tell me the origin of my set and perhaps the value?

A: The mark you describe was used by Knowles, Taylor & Knowles China Co. They were located in East Liverpool, Ohio. Take another look at the blurry letters: They are "K T & K." You have a bedroom wash set, and the large covered container is a waste bowl. Wash sets often included a large bowl, large pitcher, smaller pitcher, soap dish, toothbrush holder, chamber pot and a large covered waste container. The sets were placed in bedrooms, usually on washstands that had a place for storing some of the larger pieces and pull-out towel racks. The advent of indoor plumbing heralded the end of wash sets. Isaac Knowles and Isaac Harvey joined together in 1853. They owned store boats that sold pottery and glass along the Ohio and Mississippi Rivers. In 1854, Knowles and Harvey went into business making pottery. After buying out Harvey in 1870, Knowles was joined by his son-in-law, James W. Taylor, and his son, Homer Knowles. They became part of the American China Corporation in 1929. They couldn't survive the Great Depression and closed in 1931.

Your three-piece bedroom wash set would probably fetch $125 to $175 in an antiques shop.

Q: I have sent in the mark that is on two porcelain plates given to my grandmother for her wedding. Each plate is approximately 8 inches in diameter and decorated with large pink roses and gold trim on the edges. They are in perfect condition.

What can you tell me about my plates and their value?

A: Your plates were made in Rudolstadt, Thuringia, Germany. New York importer Lazarus Straus & Sons operated its porcelain factory from 1882 to 1918. It eventually became Nathan Straus & Sons. This "RW" mark was registered with the German Trademark of Registry in 1896. 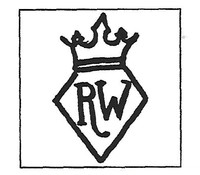 Porcelain plates were made in Rudolstadt, Germany.