Man on the Moon

Q: I have enclosed a photo of a porcelain plate commemorating the landing of the first man on the moon. On the back of the plate are the words "First Limited Edition — Plate Serial Number - F-6369 — First Man on the Moon — July 20, 1969 — Seven Seas Traders — Minneapolis — Made in Western Germany.

Can you tell me the value of my plate?

A: Seven Seas Traders Co. was located in Minneapolis. It issued a plethora of limited-edition plates commemorating holidays and special events. Most plates for Seven Seas Traders were made in Germany. In 1961, President John F. Kennedy announced the importance of the goal of having a man on the moon before the end of the 1960s. Fifty years ago, the Apollo 11 spaceflight was launched from the Kennedy Space Center on July 16, 1969. Commander Neil Armstrong and pilots Edwin "Buzz" Aldrin and Michael Collins were on board. Armstrong and Aldrin separated from the command and service module, entered the lunar module and became the first humans to reach the moon. When Armstrong and Aldrin touched down in the moon's Sea of Tranquility, they told Mission Control in Houston, "The Eagle has landed." Armstrong was the first to step on the moon's surface, and Aldrin followed 19 minutes later. Upon stepping on the moon, Armstrong spoke his famous words: "That's one small step for man, one giant leap for mankind." After collecting lunar materials from the moon for several hours, they rejoined Collins and prepared for a journey back to Earth. The astronauts returned July 24, 1969. Armstrong passed away in 2012.

Your first edition plate would probably be worth $25 to $50.

Q: I have enclosed the mark that is on the bottom of an antique platter I have. The platter is oval-shaped, 21 inches long and has a matching insert. Both pieces are decorated with blossoming branches and in perfect condition. The insert fits nicely in the platter. It has a central hole with smaller, strategically placed holes. No one knows what the purpose of the insert might be.

Anything you can tell us about our platter will be appreciated.

A: Powell, Bishop & Stonier pottery made your platter and insert. The company made porcelain and earthenware in Hanley, Staffordshire, England, from 1878 to 1891. The insert is a drainer: It was used to drain excess liquid from either meat or fish when serving.

This mark was used around 1880. Your platter and matching drainer insert would probably be worth $125 to $175. 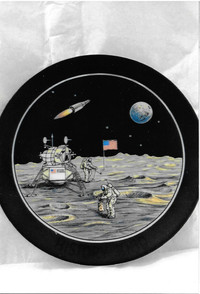 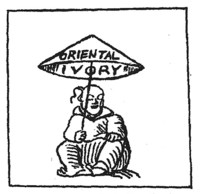