Q: This is a photo of a Reginaphone mahogany music box that my father purchased at a secondhand store in Rockville, Indiana, back in the 1960s. It is a tabletop music box that measures approximately 10 inches high, 16 inches deep and 18 inches wide. It has a double comb, and everything is in mint condition. We also have at least 20 discs. We have spent many years listening to "The Blue Danube" and other Strauss waltzes. It has truly been a treasure for our family.

Can you give us an idea of its value?

A: In the early 1890s, Gustave Bruchhausen came to America from Leipzig, Germany, and established the Regina Music Box Company in New Jersey. His factory first made wood music cabinets and imported the works from Germany. Within a year, the business became a huge success. Bruchhausen soon purchased a 25,000-square-foot factory and began manufacturing the works, discs and wood cabinets in the United States. Between 1892 and 1921, sales reached $2 million a year. By 1922, phonographs were on the horizon, and the success of the music box industry was compromised.

Q: I have a porcelain dresser set that is decorated with hand-painted pink flowers against a blue background and trimmed with gold. This mark is on the bottom of each piece. The set consists of a tray, two boxes with lids, one box with an opening in the lid and a small tray.

I hope you can provide information as well as the value of my vintage dresser set.

A. Your dresser set was made in Japan. Porcelain dresser sets were made in the late 1800s and early 1900s. The box with an opening is known as a hair receiver. It was a daily ritual for a woman to brush her hair in the morning and evening. The hair caught in the brush was disposed of in the box. The "M" inside the wreath represents the Morimura Brothers. Brothers Ichizaemon and Toyo Morimura started out producing porcelain and ceramics in Japan in 1876. They soon established offices and showrooms in New York City and London. They had the foresight to see the opportunity before them and created designs on porcelain and ceramics that catered to Western tastes. "Nippon" is the Japanese word for Japan. They continue to make beautiful porcelain dinnerware today.

Your dresser set was made around 1920 would probably be worth $75. 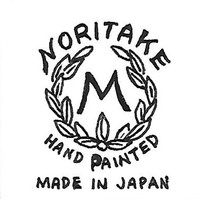