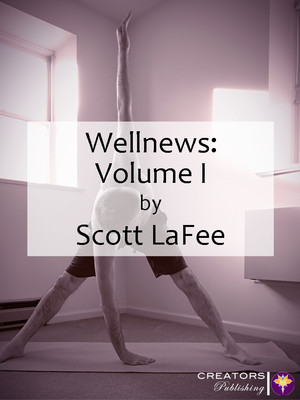 Scott LaFee is a viviparous, omnivorous, longitudinally symmetrical carbon-based male biped and staff member of The San Diego Union-Tribune. He uses the digits of the terminal part of his forelimbs to type "Wellnews," his syndicated column, every week.

"Wellnews" is an amusing and informative look at the science of health, both present and past. You'll learn about the latest interesting health studies and what they mean about the future. You'll get fun stats and figures. You'll learn about obscure phobias and manias. You'll even read funny epitaphs. And it's all presented in easily digestible morsels.

This compilation of columns includes everything from January 2014 to June 2014.

Scott LaFee is a viviparous, omnivorous, longitudinally symmetrical carbon-based male biped and staff member of The San Diego Union-Tribune. Since 1992, he has been the chief writer for Quest, the paper's award-winning weekly science section, where he covers all manner of scientific news and features, from the inner workings of the brain to the physical nature of "nothingness" -- the stuff between stuff.

He is married with two young sons, whom he coaches in soccer and swimming when not explaining why dead spiders' legs curl up (failed hydraulics) or how 8 feet of DNA can be squeezed into every cell (very carefully).

LaFee lives in La Mesa, Calif., with his hominid family and their several nonhuman pets: two tortoises, three fire-bellied toads, a rat, a rabbit and a dog named Dave.