Tropical Attire Encouraged (and Other Phrases That Scare Me)
Alison Rosen 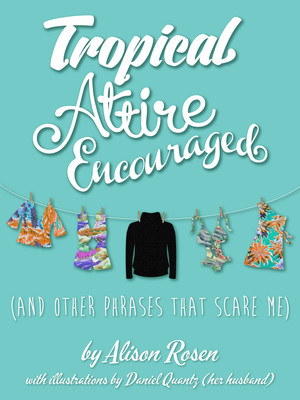 Alison Rosen, host of the immensely popular podcast "Alison Rosen Is Your New Best Friend," is ready to conquer the world of books in this collection of hilarious and unpredictable columns.

Alison wants to be living a fabulous life filled with myriad social engagements. She just also wants to not shower, put on a bra or leave the house. Plus, she dislikes dancing, the Fourth of July and costume parties that involve skimpy attire. Basically, if it’s fun, count her out, which is too bad, since she so desperately wants you to think she’s fun.

"Tropical Attire Encouraged” came to be on her birthday a few years ago, when her husband, Daniel Quantz, presented her with a hand-bound book of her columns from the first year she was syndicated. He worked late at his office to keep it a surprise. At the top of each one, he included a hand-drawn illustration. Daniel told her he made it because he wanted her to know he believed in her and felt she should be published in book form. Also because one year she gave him an over-the-cabinet-door organizer, and he wanted her to really know—like, on a visceral level—just how crappy her gift was in comparison. (He didn’t say this, but it was implied.)

Alison Rosen is a writer, TV personality and podcaster best known for her podcast, “Alison Rosen Is Your New Best Friend,” which has over 25 million downloads, as well as being the former “newsgirl” and co-host of “The Adam Carolla Show.”

Alison’s roots are in traditional media: She began her career as a professional journalist early, scoring a contributing writer byline for the Los Angeles Times while still in high school. Her work has appeared in Rolling Stone, People, Seventeen, Elle, the New York Post, Vibe, Spin, Maxim, the Village Voice, The Huffington Post, OC Weekly, Time Out New York, Yahoo and Bon Appetit, among others.

Alison has built a loyal following through her blogs, videos, social media and interactive Ustream show (the precursor to her podcast), for which she was dubbed “the future of television” by former AOL CEO Barry Schuler.

She has also carved a niche for herself as a pretty, comical, slightly devilish TV personality.

Years ago, she played in a band, which she likes to mention because it sounds cool. And she was born in Oakland, which she believes gives her cred even though she only lived there for seven months.

Alison currently resides in Los Angeles with her husband, baby and dog. She always gets lost, even though she has GPS.