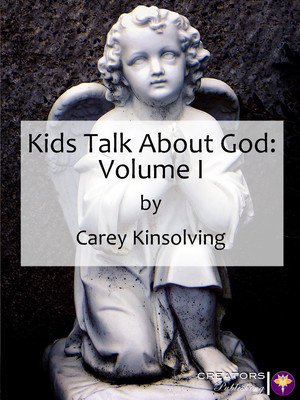 Carey Kinsolving is a nationally syndicated lifestyle columnist for Creators Syndicate. This is a collection of the very best of Kids Talk About God from 2015.

Carey Kinsolving is a syndicated newspaper columnist and seasoned religion reporter. The Kids Talk About God weekly column, distributed by Creators Syndicate, has proven so popular that Kinsolving has three book contracts that will use content from KTAG columns in different formats.

Many of Kinsolving's feature articles have appeared in The Washington Post and other major newspapers via news services such as The New York Times News Service, Cox, Hearst and Donrey. His subjects have ranged from profiles of well-known figures such as Elizabeth Dole, Tom Landry, Jimmy Carter and George Gallup Jr. to journey-of-faith stories of everyday Americans.

To gather initial material for the Kids Talk About God newspaper column, Kinsolving launched the Children's Bible Contest, which invited children to express their faith through writing, drawing and other media. The contest offered a trip around the world as the grand prize. The Mission Explorers Video Series, which Kinsolving produced and directed, features the winner of the contest in her global travels.

J. Countryman, the nation's largest inspirational gift book publisher, has released a "Kids Talk About God" gift book that features children's artwork and quotes from KTAG columns. Word Publishing is planning the release of a book in the spring of 2001 that will feature the full text of KTAG columns, along with illustrative cartoons. Nelson Bibles, the world's largest Bible publisher, plans to release the "Kids Talk About God Storybook Bible" in September 2001.

In addition to writing and producing videos, Kinsolving is a popular speaker among adults, students and children. His speeches before Rotary, Lions and Kiwanis Clubs have received standing ovations. His writing workshops have received high marks from Christian students at Yale University, Harvard University, the University of North Carolina and adults in various churches. His Mission Explorers Video Series for children has been a No. 1 seller for Nelson Word Direct, a division of Thomas Nelson Publishers.

Kinsolving believes his most important speaking function is to host Kids Talk About God Arts Festivals. The festivals create venues for children to express their faith. They also create opportunities for adults to see what Jesus meant when he said we must enter His kingdom with the faith of a child. Children receive encouragement when they see that their faith expressions are taken seriously. Adults receive a challenge to really believe God when they observe the simple ways children relate to God.

Kinsolving has master's degrees from the University of Missouri School of Journalism and Trinity Evangelical Divinity School. A native of McAllen, Texas, he currently lives in Memphis, Tenn.