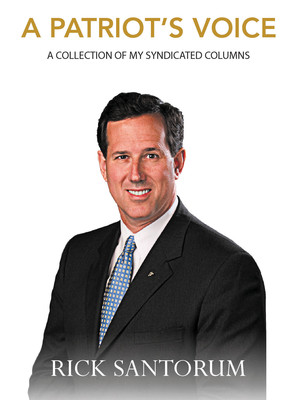 Rick Santorum is a conservative committed to restoring the American dream for hardworking Americans. The runner-up for the Republican nomination for president in 2012 is running again and building grass-roots support.

In this collection of columns from 2013, the former senator from Pennsylvania explains in his own words what he stands for and what his vision for America's future is.

In 2012, Rick launched Patriot Voices, a community of Americans committed to promoting faith, family, freedom and opportunity. And he has taken that message to the campaign trail, where he is a voice for the voiceless. A fierce defender of the unborn, Rick believes that strong families help produce a strong economy. He believes that renewing our country’s manufacturing spirit would strengthen working families and help our struggling communities return to a path of prosperity during these tough economic times.

"We must not be the party of plutocrats, country clubbers and corporate interests," Rick writes. "We must focus on ways to deliver our vision for hope and opportunity for working Americans."