Treasure in the Attic
Anne McCollam 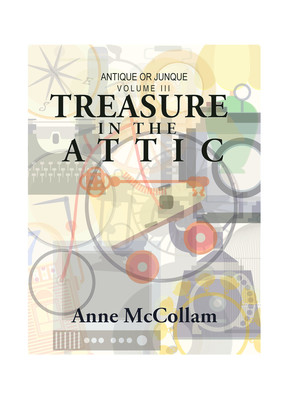 Anne McCollam is a nationally syndicated lifestyle columnist for Creators Syndicate. This is a collection of the very best of Antique or Junque from 2015.

Anne McCollam took this column  over from her father, James G. McCollam, when he retired in 1993. Previous to that she worked with him as his research assistant. Her passion for antiques actually began when she was a child, with her first collections consisting of diminutive porcelain butter pats and Victorian egg cups.

She studied art/art history at St. Mary's College at Notre Dame, Ind. A large mosaic she created is permanently installed on the outside of Moreau Hall, the art department building. For 10 years she was a docent for the Snite Museum of Art at the University of Notre Dame. There she was responsible for researching and writing tours for diverse groups.

She was also a storyteller for the museum for five years. During the mid 1990s she appeared on a nationally televised children's program representing the museum. She was on the Board of Directors of the Snite Museum of Art at the University of Notre Dame for 12 years and as president emeritus continues to be an active board member.

She is frequently asked to speak to community groups on the subjects of antiques and collecting.