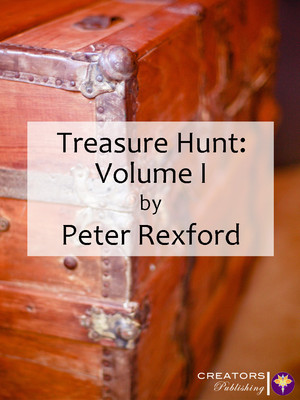 Peter M. Rexford is a nationally syndicated lifestyle columnist for Creators Syndicate. This is a collection of the very best of Treasure Hunt from 2014.

Peter Marshall Rexford took an early interest in history and the collectibles associated with it. A descendant of the Chief Justice John Marshall family, he acquired no comparable legal ambitions. He was able to emulate his ancestor by growing a ponytail in college.

As a child Rexford discovered a block of six airmail stamps worth $800 and was hooked. After college, he instituted the nation’s first collectibles division for a major New York Stock Exchange firm. While there he began writing features about popular collectibles for Business Week, Barron’s, Duns, FACT, Collector/Investor, Collectibles Illustrated and other publications. In 1982, Rexford was tapped by the St. Louis Post-Dispatch to write a weekly column on coins, stamps, currency and related collectibles. It soon became a nationally syndicated feature in dozens of major daily papers from the Sacramento Bee to the Washington Times.

Instead of writing about antiques, Peter Rexford’s Treasure Hunt  focuses on the most popular, fun and profitable collectibles, including coins, stamps, currency, autographs and other items actively sought after by one out of every two newspaper readers. (The U.S. Mint reports that over 120 million people currently collect coins alone.)

Readers of Rexford enjoy the column because he mixes humor and history with profitable advice. Advising readers what to look for as well as avoid are staples of the feature. His favorite letters not written by relatives or people who owe him money include comments such as, “I’m not a collector, but I love your column,” and “If I had never collected, you would make me want to.”

Rexford is the recipient of the MCNA First Place Award for a regular column and is a three-time winner of the Lidman Grand Award for feature writing. He is a contributing author to The Encyclopedia of Investments, has appeared with the Antiques Roadshow Keno Brothers and is regularly featured on radio and television and the CBS Radio Network talking about popular collectibles.

He’s also worked with the Henry Ford Museum and Edison Institute, and serves as a consultant to Northern Trust, Bank of America and other financial and legal institutions assisting in the valuation and disposition of collectible holdings.

Rexford and his family make their home in St. Louis, Missouri, though he frequently travels around the United States and abroad on the hunt for exciting collectibles.